Anthony Clavane’s most recent play – Playing the Joker – which performed at the West Yorkshire Playhouse, once again addresses the themes of identity and belonging, northerness and class, framed within the context of the game of Rugby League. Advertising it, the venue promised theatre-goers a “play, a pie & a pint” all for the princely sum of £10, writes Matthew Rhodes. 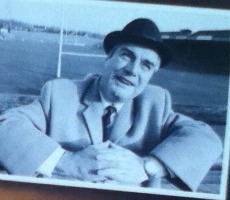 Rugby League – the game in this country primarily owned by Yorkshire and Lancashire, and overseas by Australia & New Zealand – is indisputably the more gritty and working class variant of the rugby codes. It was formed in 1895, when a dispute broke out with the amateur Rugby Football Union (RFU) over payments made to working class men to recompense them for Saturday mornings spent on the rugby field, rather than at the factory. Since then the games have drifted further and further apart, as League developed its own distinct rules, originally making it a far more physical game, both faster and more brutal than its Union cousin.

Playing the Joker examines dual themes. On the one hand there is the confidence secured by a game and a region as the result of the 1895 breakaway. On the other there is the insecurity still evident in a game/people: its bullishness about the superiority of both the North and League as an attractive game that arguably belies a not so hidden inferiority complex. Clavane uses as his prime story telling device the personification of Rugby League, the great Eddie Waring, coach, commentator and television presenter. Born in Dewsbury, West Yorkshire, 56 years before I was born in the same town just south of Leeds, he was the main voice of the sport for over 25 years and effectively ran the game from his base at The Queen’s Hotel in Leeds.

The play examines Eddie’s complex character and his interaction with “his” public, which was also equally complex. Using the device of a younger Eddie, who was born on the same day as the famous 1968 Challenge Cup Final (known as the “Watersplash Final” due to its rain-sodden pitch) and named after his father’s great hero, a long dialogue between Waring and the young man ensues. The hotel doorman Dave provides a protective and slightly menacing figure as he guards Waring, both physically and emotionally.

Young Eddie is deeply connected to Waring due to his birthday and the reverence with which he is held in his childhood home. However, he voices the ambivalence many felt about Waring’s “comedy northerner” persona, which they argued damaged the reputation of the North and made it, him and the game of Rugby League a laughing stock amongst the effete metropolitans “down South”. That Waring was a polarising figure, even amongst League fans, is clear. A petition was even organised by some diehard supporters who felt his portrayal of the game that wanted to play more and northerners in particular was damaging (perhaps even a betrayal) to the image of the League and its ability to transcend its geographical roots (prison?).

Although the play leaves it up to the audience to decide which side of the argument to come down on, it’s easier to feel that Waring did “sell out” the North and the game he loved to further his own career and to entrench the parochialism of a game. Perhaps he feared he might lose it if it ever became too popular. Clavane himself has written, in his acclaimed book Promised Land, that as a young Jewish boy growing up in Leeds in the late 60s, he was specifically attracted by the bright lights Elland Road and Don Revie’s Leeds United precisely because they were – with their various European exploits – able to help him see beyond the horizons of Leeds, Yorkshire and the North to his own Promised Land. For Waring, it might have been something simply too difficult and even painful to contemplate.

The recent Rugby League World Cup, hosted in England and Wales, attracted relatively large crowds and sell outs for the final stages (especially when England were playing). Yet it also provides more evidence of the difficulty that League has had in registering in the national consciousness. Many, including a number of avid sport fans, would be forgiven for having missed it entirely. As Clavane himself has said in a recent piece for the New Statesman, there have been “periodic” attempts to expand the game’s appeal, but in the end “at heart… it remains rooted in – perhaps locked into – its dissenting, regionally distinctive history. Rejoice.” I think Eddie Waring would agree.