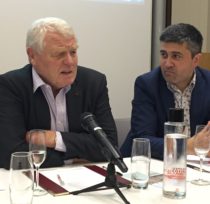 “I owe my existence to Indian army Muslim soldiers,” Paddy Ashdown told the audience at British Future’s Westminster event to celebrate the shared contribution of Muslim soldiers to Britain in the First World War.

Telling the story of his own father who, in the Second World War, marched his Indian troops through France back to Dunkirk for evacuation, the former Lib Dem leader and Royal Marine said: “I am the eldest of seven children… I’m pretty sure that I was conceived, probably very quickly, after the night when my father arrived back with his Indian troops”.

Too few people are aware of the massive contribution made by Indian forces to Britain’s First World War fighting force, Ashdown added. “The forces who fought for Britain back then looked much like the multi-ethnic Britain we live in today.  That’s exactly the kind of common ground we need to build if we’re to make integration work better.”

Lord Ashdown was part of a panel discussing the role that shared history could play in promoting integration in modern-day Britain. He was joined by the descendants of Indian Muslim soldiers who fought in the First World War and the descendants of British army officers who led Indian regiments. They had been brought together, by British Future and New Horizons in British Islam, at the National Archives to uncover more about their grandfathers and great grandfathers who fought side-by-side, working with genealogists to verify stories passed down through the generations. 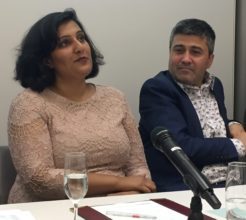 Rabia Mirza from Derby, who uncovered more about her own family’s WW1 history as part of the project, said:

“When you see depictions of the men who fought in the trenches 100 years ago, you don’t see many brown faces. But they were there – Muslims, Hindus and Sikhs. My own great-grandfather was there.

“I think it’s important for young Muslims growing up in Britain to know that their own ancestors are part of this country’s history. That’s not always an easy conversation – my grandfather fought as a subject of the British Empire, after all – but it’s still an important one, about history that we all share.”

Dr Irfan Malik has conducted extensive research on his own family’s WW1 history and now gives talks on the contribution that his ancestral village, Dulmial, made to the war – 460 men served in the British armed forces in 1914-18, a record for South Asia, including both of his grandfathers. Dr Malik said that awareness of the Muslim contribution would have helped cement his own sense of British identity when it was challenged by racists while he was growing up: “I wish I’d known this back in the 70s when I was chased around by skinheads.”

Watch our film of the National Archives project:

The event was part of the Unknown & Untold Project, which celebrates and raises awareness of the Indian Muslims who fought during The Great War as part of the British Army. Around 1.5 million Indian soldiers fought for Britain in the First World War, 400,000 of them Muslims from what is now Pakistan. The Project aims to promote this little-known story so to honour their bravery and ensure their remembrance alongside others who served.

“One success of the Centenary commemorations is that more people now know about the First World War contribution that Commonwealth soldiers made to Britain.

“We’ve found an overwhelming consensus that teaching this shared WW1 history to all children would be good for integration. We should do more to ensure that awareness of this common ground keeps growing as the Centenary period concludes in November 2018.”

Lord Ashdown spoke of his father’s relationship with the Indian soldiers, and why it is more important than ever to remember the contribution made by soldiers from across the Commonwealth. “My own family’s history of military service has certainly shaped my identity and the path my life has taken. Our British national identity, too, is formed by our history, including this country’s involvement in two world wars,” he said, adding: ““My Old dad would be so proud of this event – and so am I.”

Unknown and Untold continues to run projects across the UK, moving next to Leeds and Bradford and then to Blackburn, Portsmouth and across London. For more information about the project and how you can get involved please contact laura@britishfuture.org.