England and Arsenal footballer Jack Wilshere this week suggested that only English-born players should be eligible to play for England, pitching into a media debate about which national team the young Manchester United player Adnan Jaznan should play for. His views are out of step with most of the country’s sports fans, writes Sunder Katwala.

Nationality isn’t just a question of birthplace. It’s about identity and belonging. John Barnes wasn’t born in England, nor was Terry Butcher, who was born in Singapore. They wore their England shirts with pride just as much as David Beckham and Paul Ince. The public were very clear during the Olympics: we cheer equally for every athlete who wears our vest. We don’t cheer less for Mo Farah or Bradley Wiggins because they were born abroad. Rising stars like Wilfred Zaha, Saido Berahino and Fabrice Muamba have talked about their pride in playing for the country which gave them protection and new chances in life when they came here as children. Their pride in our country makes me proud to be English; it doesn’t make me fear we are diluting our national identity.

It’s not clear why the media should debate who Adnan Jaznan wants to play for. After all, he has never said he wants to be considered for England. The sensible thing to do would be to let him tell the world which shirt he would wear with pride. He’s an exciting new star of the Premiership, and his life story means he could qualify for Belgium, where he was born and grew up, or for Albania, Serbia or Turkey under rules about parents and grandparents.

If he really did feel that he belonged here most, and this was the country he wanted to play for, the FA could consider his individual case. If his international loyalties lie elsewhere, then I’m sure he’ll make the right choice about what’s in his heart.

A lot of people don’t agree with Jack Wilshere on who should be able to play for England. It should be about your pride in putting on the shirt, not where you were born. If your family came from abroad to live here and you love England, why shouldn’t you be able to express that on the football pitch?

Denying England team membership to those who chose this country as their home would deprive us of some of our favourite sportspeople. It poses an interesting question, Who would make your top 10 foreign-born sport stars?

Here is my personal selection … 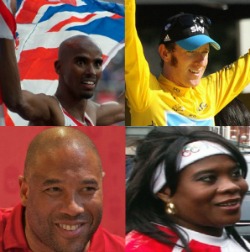 “No mate, I’m British. This is my country” was Mo Farah’s response to being asked if he would rather have won his Olympic gold medals for Somalia. His gold medal double-double in the Olympic and World Championships has seen the Somalia-born fan of Arsenal Football Club heralded as perhaps Britain’s all-time greatest track athlete. He will run for England in the Commonwealth Games next summer.

Ranji’s 154 not out against Australia in the Ashes at Old Trafford in July 1896 still ranks among the all-time great Test debuts. The Times had written of his omission from the previous test that “There was some feeling about K. S. Ranjitsinhji’s absence, but although the Indian Prince has learnt all his cricket in England he could scarcely, if the title of the match were to be adhered to, have been included in the English eleven.” But the more popular papers clamoured for his inclusion. The Australians responded positively to an English inquiry as to whether it would be considered sporting to pick him. In fact, Ranji had invented the myth of his being an Indian Prince, using his cricketing fame to make the legend come true. He became an inattentive Maharajah back home and was appointed by Britain to be an Indian representative to the League of Nations, all the while living the high life in Geneva.

The Belgian-born son of an Australian cyclist grew up in north London and is hailed at home in the north-west too. He achieved perhaps the greatest of all British sporting triumphs in 2012, taking the Tour de France before winning Olympic gold. Britain’s first ever Tour de France winner was succeeded by another British champion: Chris Froome, who was born in Kenya.

Trinidad-born McDonald Bailey was the only black member of the 1948 British team. An enormously popular sprinter, he held the world record jointly with Jesse Owens. Disappointed to finish sixth in the 100 metres at the London Games, he bounced back to take bronze for Britain in Helsinki in 1952. Britain’s foreign-born Olympians go back well beyond McDonald Bailey in fact. Our first ever Olympic medallist, Charles Gmelin, who won bronze in the Athens games of 1896, was born in India.

One in three of England’s cricket captains were born abroad, an illustrious line including Ted Dexter and Andrew Strauss. The most contentious was Douglas Jardine. Born to Scottish parents in Bombay, he was England’s captain during the bodyline series, controversially finding a winning formula to defeat Bradman’s Australia. He captained England in the country of his birth in 1933.

The Jamaican-born British Olympian competed in six Olympic Games, winning gold in 1984 and three Commonwealth gold medals for England. Sanderson’s javelin duel with Fatima Whitbread, London-born to Cypriot parents, made the women’s field event one of the popular highlights of every major championship of the 1980s.

The West Bromwich Albion star told England’s young footballers recently about how he received a bullet in the post when selected for England in 1982. Born in French Guinea, he came to London with his family as a young boy, and was part of the great West Bromwich Albion team of the late 1970s, which transformed local attitudes to race. Today West Brom fans wonder if Burundi-born rising English star Saido Berahino scoring the winning goal for their first victory at Old Trafford since Regis’ days mean the glory days might be on the way back.

Basil d’Oliveira, the mixed race cricketer classified as ‘coloured’ by the apartheid regime, had to leave South Africa to pursue his career as a cricketer in England. He became British and made his England debut in 1964. The MCC was tempted to exclude him from the England squad to visit South Africa in 1968, to avoid a political clash, but public and media pressure for his selection on merit prevailed. South Africa cancelled the tour, entering decades of sporting isolation until apartheid ended. D’Oliveira’s legacy was widely celebrated in both Britain and South Africa, on his death two years ago. The extensive contribution to English cricket from those born in South Africa has also included England captains Tony Greig and Allan Lamb, Andrew Strauss and Kevin Pietersen.

Barnes’ mazy dribble in the Maracana stadium in Brazil may be perhaps the greatest England goal of recent decades. Born in Jamaica, Barnes played 79 times for his country. He almost brought England back into the match during a thrilling appearance as a substitute after Diego Maradona’s hand of God goal in 1986 but his World Cup hopes were dashed.

Butcher, whose blood-soaked shirt during the England World Cup qualifier in Sweden epitomised the defender’s commitment, was born in Singapore. He was brought up in Suffolk, where he became a stalwart  in Bobby Robson’s great Ipswich Town side.

The selection of Manu Tuilagi for England has raised the question of foreign-born players in the national rugby team, with the Daily Mail both hailing him with Manufique’ headlines while simultaneously questioning his credentials. Of more than 100 foreign-born English rugby internationals, few can have had as extraordinary a life story as ‘the flying Prince’, Prince Alexander Sergeevich Obolensky, who fled to Britain to escape the Russian revolution. Obolensky scored two tries on his England debut in 1936 for the team’s first ever victory over New Zealand. He joined the RAF on the outbreak of the second world war, being killed, aged just 24, in 1940.