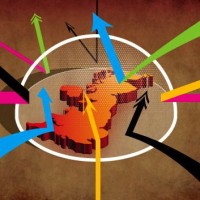 This round of quarterly ONS stats was always going to be even tougher than usual for David Cameron, writes Sunder Katwala, coming as they do just a month ahead of the EU referendum. The headline figure – net migration at  333,000 – underlines once again the impossibility of meeting his ‘tens of thousands’ net migration target while Britain’s strong economy remains attractive to Europeans able to work here under EU free movement rules.

The Prime Minister won’t admit it now, but the net migration target will have to go if Britain votes on 23 June to remain in the EU. Only he and Theresa May seem able to detect any vital signs in a target that has effectively been dead for some time. Prominent voices from the ‘Leave’ side of David Cameron’s own party are becoming increasingly outspoken in their observations of its demise.

Some Conservatives have been increasingly candid about the failings of the target. Speaking from his ‘Battlebus’, Boris Johnson said “What you certainly shouldn’t do is promise to cut it to the tens of thousands and then it turn out that you’ve got hundreds of thousands.”

Employment minister Priti Patel also criticised the damaging limitations that the target places on skilled non-EU immigration (particularly, in this instance, of curry house chefs) when that is one of the few flows that the Government can control due to free movement of EU workers

The ONS figures are another blow to public trust in the Government’s ability to handle immigration while it remains shackled to this unreachable net migration target.

The public wants a competent, orderly and fair system for managing immigration. A net migration target that is receding further into the distance every quarter just gives people the impression that the Government cannot get a grip. Once the referendum is settled it must surely be time to look again at the net migration target – perhaps with the help of a ‘Comprehensive Immigration Review’ conducted by the experts on the Migration Advisory Committee (MAC) – and consider some smarter and more achievable targets grounded in policy.

Some advocates for ‘Leave’ are likely to seize on the ONS statistics to back up their argument that Britain should get out of the EU in order to reduce immigration. But it should be remembered that the status of EU migrants already living in Britain is not on the referendum ballot paper in June. That decision could certainly affect future immigration policy: but Vote Leave, Boris Johnson and Ukip have all publicly backed calls from business, migrants advocacy groups and others to clearly state that EU migrants already here can stay whatever the referendum result.