At Birmingham’s Alexander Stadium where the IPC Athletics Grand Prix final was held on 29th June, families formed not-so-orderly queues at ice cream vans, children’s hands reached for free thunder sticks handed out by event sponsors, and everywhere you looked people were smiling. With the sun overhead, it was almost the antithesis of British summertime, writes Jo Tanner. 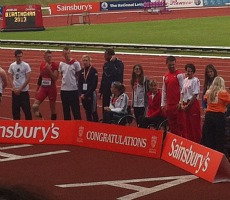 The winners from the event

As people milled about waiting for the sporting competition to begin, there was an air of anticipation. While the venue may have been somewhat removed from the Olympic Stadium – it’s accessed by walking alongside some very well-maintained City Council allotments – the atmosphere for the event was very similar.

But they aren’t waiting for Mo Farrah or Jessica Ennis. The 5,000 spectators were there to see the stars of Paralympic sport. Cheers went up around the stadium as the headline acts were reeled off, names which, a year ago, many of us didn’t even know: Richard Whitehead, Hannah Cockcroft and, of course, David ‘the Weirwolf’ Weir.

Before last year’s ‘festival of sport,’ athletics venues such as this one in Birmingham might have struggled to fill so many seats for events. Such things were for the die-hard fans, not the casual spectator. The don of wheelchair racing, David Weir, reminisced to a trackside report that the first time he raced at Birmingham he was watched by just five people, and one of them was only walking his dog.

So is this thousand-fold increase in turnout based on nostalgia for 2012, or is it something deeper? The nation sat, stood and cheered together as Team GB brought home medal after medal at the London Olympic and Paralympic Games. Did that experience unleash something within us, never to be rebound, or, once unleashed, did it sputter out like the Olympic flame?

Talking to some of the people who had bought tickets to the Birmingham event, it’s fair to say nostalgia did play a part. That uplifting feeling of cheering on old and new heroes can be addictive and some were looking for another fix of the 2012 drug.

For others, though, it was more that the Olympic flame had ignited a sense of national pride that they didn’t want to extinguish. The Olympics and Paralympics, they said, reminded them that there is much to celebrate in 21st century Britain, that people can come together and share positive experiences.

Young disabled people had seen the 2012 Games as aspirational. A year on, they are looking at ways of emulating, even surpassing, their heroes and a number of them, including 15-year-old Lauren Rowles (see video below), are already looking toward Brazil in 2016.

In British Future’s Team GB report last August, director Sunder Katwala said that it would be an unexpected surprise for the 2012 Games to change our society for good. Looking around at the athletes and spectators – white British and minority ethnic, able-bodied and disabled – perhaps we should expect the unexpected.

Jo Tanner is director of communications at British Future.

Watch a video of people at the event below:

"'The Australian points system: what does the public think?' @britishfuture analysis of recent @ICMResearch polling… https://t.co/WvKvE6wuMY"
"Response from British Future Director @sundersays to govt announcement of new #immigration system: https://t.co/jUrda6CpTH"
"RT @jillyrutter: Extending the move on period to 8 weeks would enable new refugees to look for and find work, saving money and helping inte…"
"RT @JCWI_UK: Aisha's dream is to become a maths teacher. But she's also desperate to have her family back together Now, the @ukhomeoffice…"