“This is off the record right? Before this conversation goes any further I need to know my name isn’t going to appear anywhere.” Thus speaks a Catholic woman from Northern Ireland upon being asked questions about her 35-year marriage to a Protestant, writes Jemimah Steinfeld. 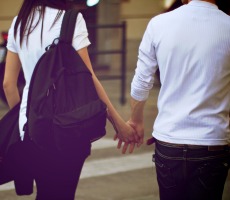 We carry on talking under the promise of anonymity. The woman comes from a family of devout Catholics.

“They were not welcoming of my husband. Even his name caused issues,” she explains. She now has seven children from the marriage, all of whom have been raised to date who they want so long as the person is decent and honest.

“Things are much easier now than before, in part because of the diminishing power of the church,” she adds. Yet it’s still not something she openly wants to talk about both in terms of herself or her children.

Mixed marriage is a taboo in many cultures. But in Northern Ireland, where church affiliation reflects more than just belief, it’s particularly controversial.

“In London you says, ‘What is he? He’s an accountant.’ Here it’s ‘He’s a Presbyterian,” jokes Paul McLaughlin from the Northern Ireland Mixed Marriage Association (NIMMA).

McLaughlin then narrates another story. He was approached by a local Irish TV station and asked for the contact details of people from mixed marriages. He thought it would be easy to accede to their request. Instead it turned into a mission impossible. He tried to arrange for people to go on air, but only one person responded. Even then, they didn’t want their face to appear on film.

This was only a few months ago – and reflects a hidden truth about Northern Ireland today; more couples are bridging the Protestant-Catholic divide than ever before, but many remain unwilling to talk about it.

It’s something McLaughlin has become accustomed to. During his first week at NIMMA, he was chatting to a woman about her mixed relationship. At the end of the conversation she thanked him, saying he was the first person she had opened up to. “That happens on a regular basis,” he adds.

Outside of NIMMA it’s the same story, as the furor surrounding Protestant boxer Carl Frampton’s public embrace of his Catholic fiancé Christine Dorrian attests. Roars of support greeted the kiss, which occurred in October 2013, precisely because it was a rare sign of unity.

Some groups, however, are starting to talk more openly and if this trend continues, it could really change the fabric of Northern Ireland. Anna Carragher, who’s Commissioner for the Equality Commission for Northern Ireland and former Head of Programmes for BBC Northern Ireland, says she has noticed a distinct shift in attitude towards mixed relationships. They’re no longer “shameful”, as they were seen when she growing up, though she does caution that recent change is largely along class lines.

“The middle class is much more open and accepting,” she notes.

For Carragher, this all forms part of a wider shift – that concerning Northern Irish identity overall.

“The number of people who describe themselves as Northern Irish as opposed to Southern Irish or British is increasing,” Carragher explains.

As more and more couples cross the divide, it’s no surprise that their reception is changing too. Protestant Roley Mcintyre met his wife, a Catholic, during the height of the Troubles, in 1984.

“In the early stages things got very nasty. My Protestant friends called me a traitor,” says Mcintyre. It’s much easier for his children.

Richard Temple agrees. He’s of mixed parentage and says that it was pretty difficult for his parents back in the day; they eloped in England as a result. But when he and his friends transgress tribal lines it’s generally light-hearted.

“There’s a whole sense of humour about it now. I know a lot of people dating people from other backgrounds and they mostly experience just mild jokes,” says the 29-year-old, who requested to use a pseudonym.

“I get called a Jaffa because I’ve got a bit of orange in the middle!” he adds.

NIMMA estimate that just before the Troubles, one in 10 marriages were mixed. These figures dropped substantially during the Troubles. They have since risen to around the pre-Troubles level, though in reality they’re probably much higher. What’s more there are plenty of people in mixed relationships who simply aren’t married (recent statistics from 2012 on marriage in Northern Ireland show a decrease of 17% from 1982 figures).

Aside from the long-term implications of greater romantic unity, that more people are now getting together speaks volumes for how much Northern Ireland has changed. During the Troubles the country closed down. It’s now open for business, as Derry-Londonderry City of Culture 2013 shows. Sports, the arts, even social media – these are all bringing young people in Northern Ireland together.

“People tended to socialise in their own pockets [during the Troubles]. Now the young are out and about. You don’t fancy someone just because they are of the same denomination as you,” adds McLaughlin.

Of course it’s not all rosy. On top of feeling unable to openly talk about mixed marriage, the infrastructure of Northern Ireland remains largely segregated. Education is still divided along sectarian lines. More than 92% of children attend either Catholic or Protestant schools, with many young people bussed to schools based on their religion. Integrated education has grown at the preschool and nursery level, according to Bernie Kells from the Northern Ireland Council for Integrated Education(NICIE), an organisation dedicated to improving integrated education, but it’s actually fallen at secondary school level.

And the issue of deciding where to live continues to plague couples in a mixed relationship, particularly those who reside in Belfast. Mixed areas remain few and far between, and with higher demand from more mixed couples, they’re becoming expensive too.

“Evidence from my own eyes says places for people to meet and mix are growing, but one of our great problems in Northern Ireland is that we’re not good at public spaces. The Odyssey in East Belfast will attract more Protestants for instance,” explains Carragher.  Then, shooting a cautious look, she adds: “This is all anecdotal of course.”

“There are still flashpoint areas in this country,” says McIntyre, whose children were raised to go to Protestant and Catholic churches on consecutive weeks and from there decide which identity means more to them. But he ends on a positive note:

“The majority of people here are enjoying peace time. They just want to get on with their lives. They’ve had enough.”

This article originally appeared on Huffington Post. It has been modified for British Future.