How young voters could transform this country’s politics

Engaging young people in the political system could have ramifications which are exciting, unexpected – and urgent, argues Henry Hill. 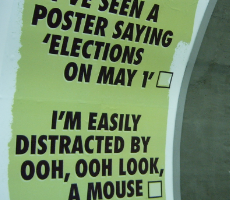 It’s no secret that young people are under-engaged in our political system. Youth turnout at general elections pales in comparison to their elders, who have learned the habit of participation during lives lived in an era of mass party membership, mass newspaper sales and much higher levels of general enthusiasm for the joining of parties and the firm choosing of sides.

The effects of young people not turning out are equally plain to see. Set aside even the short-term points about maintaining pensioner benefits whilst cutting the Education Maintenance Allowance and raising tuition fees – in the long-term, our economic system is facing a profound crisis.

The source? An economic phenomenon called the dependency ratio. The premise is very simple: the number of people in work (the productive) vs those out of work (the dependent). In societies with young populations, there are several working people supporting each retired person. In countries with an ageing population like the UK, the situation is the opposite: there will increasingly be several retired persons whose state support is paid for by the taxes of a single young worker.

That puts the current injustice about maintaining older benefits whilst cutting services for the young into perspective, doesn’t it?

Older voters are highly active, and meeting this challenge will not be popular. Politicians will put it off for as long as they possibly can, as each understandably hopes to pass the buck to the next set. And nothing helps them evade responsibility quite so much as young people’s voting habits – or rather, distinct lack of voting habits.

Today is National Voter Registration Day. It marks the culmination of a campaign by Bite the Ballot to register hundreds of thousands of young people to vote. Their experience demonstrates quite how facile glib talk of ‘youth apathy’ actually is. In school after school Bite the Ballot has turned whole classes of disengaged pupils into registered voters, by the simple method of showing them how politics intersects with their day-to-day lives and illustrating through games how political decisions are made.

It shouldn’t be any surprise that this works. Previous generations were not somehow biologically inclined towards political participation – they simply grew up in an age where such participation was expected, and which prepared them for it. Bite the Ballot hopes to register a quarter of a million young people to vote today, and to double that by 2015.

You’d expect this to have a profound effect on the way that things like education and youth issues are debated in this country. But it would be a mistake, not to mention patronising, to imagine that the effect would be limited to youth issues. An ever-increasing number of young voters could transform this country’s politics.

Polling has consistently shown that today’s young people have a unique political worldview, which sets them apart both from older people in this country and their peers abroad. They are perhaps the most liberal generation this country has ever seen.

Tolerant attitudes towards homosexuality and alternative lifestyles are the norm. But perhaps unexpectedly, this individualist attitude extends across a huge range of policy areas. The young are increasingly likely to be deficit ‘hawks’ – not surprisingly, in light of the circumstances I described above – and take a pro-commerce attitude towards big business.

More striking still is their tendency towards favouring personal responsibility in lifestyle decisions. Young people raised in New Labour’s Britain, where smoking was thoroughly ‘de-normalised’, are more likely to oppose anti-tobacco legislation than their elders. Yet politics, dominated as it is by the middle-aged and elderly, shows no sign of adapting towards this new reality. None of the main parties appear prepared to make a proper pitch for the new ground.

Nothing quite highlights this as well as the fact that, despite holding attitudes which chime with much of the party’s beliefs, only 12% of young people identify the Tories as the party that best represents their views. On the other side of the spectrum, Labour and leftwing student leaders see that figure and complacently presume that young people are in their corner.

Connecting with an expanded and engaged youth electorate will not only help young voters win a better deal in the short term, but will shake the major parties out of their comfort zones and help to focus minds on the big economic and demographic challenges facing this country. National Voter Registration Day deserves our full support.

British Future is making its own contribution. In partnership with the Daily Mirror, we’re launching the ‘Voice of a Generation’ – a year-long, fully-paid internship with the paper for one 17-21 year old.

The successful candidate will start work a year out from the 2015 general election and spend the next year finding out and reporting on the issues that matter to first time voters, whilst being mentored by senior Mirror journalists. Details of how to apply can be found at the above link, but hurry – applications close Friday 14th February.