“Foods from all over the world have become so British and so ingrained in British cuisine that we often forget where these foods have actually come from,” says Amarjeet Singh from Refugee Action, the national charity working with refugees and asylum seekers, when asked about what she regards as a true British dish. 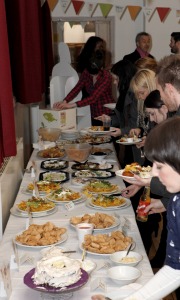 “It is really great that certain foods have become so ingrained in British cuisine, but you need to give credit where credit is due,” she adds.

Singh raises a good point. We are all more than aware that the British curry has its roots in immigration from India and Pakistan, but few know that even fish and chips – arguably the most quintessential British dish – is not indigenous to the UK. Rather, it has its origins in Jewish immigration from Spain and Portugal in the seventeenth century.

Promoting this knowledge and celebrating the UK’s great, eclectic food culture is part of the reason Singh has become involved in Refugee Action’s World Food Night. Now in its second year, World Food Night takes place on Friday 22nd February, although there will be separate events throughout February and March. The campaign is backed by Mr Reggae Reggae Sauce himself, Levi Roots, and will see hundreds of people across the country holding dinner parties and organising food events to celebrate the positive contribution migrant communities have made in the UK and raise funds for asylum seekers and refugees who are rebuilding their lives here.

Singh is helping out with events across the West Midlands, such as one being held at Vietnamese restaurant Café Soya in Birmingham on 1st March, where people will come together to eat, drink and be paid to sing karaoke. “Or paid to not sing!” she jokes.

If British Future’s State of the Nation Report 2012 Hopes and Fears is anything to go by, the turnout should be great. The report revealed that 68 per cent of people think immigration has been good for British food, with people from the West Midlands the most enthusiastic about the dishes that are now available.

Singh herself definitely recognises the importance of food in building a community. Born in London to parents from India, food has always been central in Singh’s life. “I was raised in London where you couldn’t walk down one single street without seeing different migrant foods.”

For Singh, a particular highlight of growing up was the langar, a Sikh communal meal that is served at temples throughout the UK. “An integral part of Sikhism is the shared meal,” says Singh, who describes a childhood spent enjoying these meals. At the langar vegetarian food is served to ensure that all people, regardless of their dietary restrictions, can eat as equals.

“I grew up knowing that food really does connect people. It transcends barriers and borders because in the end of the day everyone has got to eat,” she notes, adding, “Food and music have been chosen because everyone has something to do with them and usually on an enjoyable level.”

So back to the question of a true British dish, what would it be? “Curries, pies, fish and chips… It is anything and everything. You can’t really pinpoint it. Cuisines have all melted into one in the UK,” she says.

To cook up a recipe for change and make a difference to people’s lives visit the World Food Night website here.

Place the chicken in a bowl and leave to one side.
In a separate bowl mix all the other ingredients above and then pour over the chicken. Make sure all of the meat is well coated.
Leave overnight in the fridge.

Fry the onions and garlic until lightly browned.
Add the turmeric, fenugreek, fennel and cumin seeds and the curry leaves.
Pour in the tomatoes and cook until most of the moisture has evaporated
Add the butter.
Add the chicken with all the marinade and cook for 15 mins until chicken is cooked through.
Serve with a simple Indian flat bread or basmati rice. Serves four.