The inscription on the Cenotaph in Glasgow’s George Square testifies to the remarkable fact that one in forty of those who fought in the first world war came from the city. 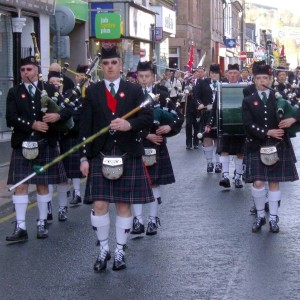 Civic leaders and the public gathered to lay wreaths on Sunday, and the city will, along with others across Scotland, mark the Armistice Day silence at 11am this morning.

Glasgow has been dubbed the independence capital of Scotland since, just over a year ago, a majority of Glaswegians voted for independence in the referendum. They were outvoted by the majorities in Edinburgh, and across Scotland, to maintain the Union, for some time at least.

Those on both sides of that Scottish debate will come together to remember. Many will be wearing the Scottish poppy – the subtly different design, with four leaves rather than two – through which PoppyScotland raises £2 million a year for the Scottish poppy appeal, in partnership with the Royal British Legion’s efforts across the rest of the United Kingdom.

British Future’s research on public attitudes towards Remembrance shows that is valued across Scottish society – including by those with opposing views of Scotland’s national question.

As everywhere else in Britain, both the voluntary choice to wear a poppy and the decision not to should be respected, but the attitudes research finds that personal participation in Remembrance remains something that matter to most Scots – and that the traditions of Remembrance continue to unify people across Scotland, remaining successfully insulated from the political debates about Scotland’s constitutional future.

Across Britain, the research found strong majority support, across all ethnic and faith groups, for the idea that Remembrance brings people together across ethnic and faith lines.On the question of whether Remembrance is more likely to unite or divide, the responses in Scotland were almost identical to those in England. 73% in Scotland said that they believed Remembrance brings people together, with a minority of 13% concerned that it could prove controversial and divisive.73% of those who had voted SNP in the General Election believed that Remembrance is more likely to unite than divide; a view shared by those with a ‘More Scottish that British’ identity, where 76% of respondents saw Remembrance as inclusive, with 11% concerned it could prove divisive.

Few would make a confident prediction about the future direction of Scottish politics, which will continues to be a passionately argued and sometimes polarising debate.

Whether future Remembrance ceremonies each November take place in an independent Scotland or within the United Kingdom, remembering the service and sacrifice of Scottish, British and Commonwealth troops seems sure to remain a valued tradition.