On Friday afternoon Next Generation blogger Bryn Lewis arrived in Butetown, a small community on the edge of Cardiff, for Finding Your Future, an event co-hosted by British Future and National Theatre Wales. The impression initially given of Butetown was of a community under siege, left to wither against a backdrop of moneyed developments. But after a night of animated discussions and activities with people from the area, this view was challenged. Here he explains exactly why. 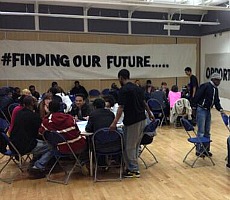 Discussions underway at the Finding Your Future event

When I arrived at Butetown Pavilion, a building centred on providing facilities for the youth of the area, development of the complex was not yet complete and I was greeted by a series of workmen. However, when I was given a guided tour of the facility, I was impressed by the level of energy, enthusiasm and resources both in the Pavilion and amongst its staff.

A group of us were gathered for the British Future event. The sense of anticipation rose as the starting point moved closer and when finally it begun we were sat in four groups surrounded by banners inscribed with motivational messages. The first task, a quick warm-up, was to look over our own past and decide which opportunities we felt we missed and which we were glad for having taken. This task set the tone for the event, which was filled with personal reflection, alongside a sense of accomplishment and hope for the future.

After this we were asked to think of ways in which the future could be improved. Education was of course raised, but people also questioned exactly what constitutes happiness.

Then we were given a map and asked simply where we think we’re going to be in 10 years. The members of my group quickly relaxed into an animated discussion, weighing up such things as the opportunities in Britain, a sense of returning to homelands and even just places that would be nice to visit. Answers ranged from Saudi Arabia, Germany, New York and London. For me, Wales will always be my home, but travel is a passion. Where I’ll be in 10 years left me wandering. As the map filled up with coloured stickers, I looked over it and imagined all of the opportunities that are actually available.

Finally, we were asked to clear the floor for an activity. We formed a large circle and a ball was thrown from person-to-person. The receiver of the ball had to say what they would take away from the experience. At one point a member of the local arts council said how she hoped she could help in the future, at which point a member of the pavilion youth asked quickly to arrange a meeting. This was a great example of how events such as these not only galvanise communities, but can have practical knock-on effects.

With such a large group I didn’t acquire the ball. This did not stop me from reflecting on the event myself. It left me with several conclusions. Firstly, there is definitely a sense of a lot of hope for this community. Even though I am not from the area, there is undeniably passion aplenty around.

Secondly, many of the thoughts and plans that were discussed here are marvellous examples and could be used in many small communities. I personally learnt much from the night and will be taking the newfound wisdom home with me to better support my own locality.

Finally, it shows that even a small group of people can make a difference, providing they are working with enough belief and passion in the people around them. The long-term effects of this kind of project remain to be seen, but I for one hope that Butetown retains its commitment to bettering the future of the people within it, and hopefully people further afield as well.

The end of this finale featured a theatrical flourish – one of many on the night – as the ball was given back to the night’s opening speaker, who proclaimed that everything had gone well and that food awaited downstairs. As people moved towards the door, I had a quick opportunity to gather my things and congratulate everybody on the event. It went fantastically and really highlighted the power of community and creativity.

Bryn Lewis, 23, who lives in north Wales, is a youth worker with the Bangor Youth Group and is one of British Future’s Next Generation bloggers.

Watch a clip of highlights from the event below: