A new ‘Poppy Headscarf’ launches today, backed by the Islamic Society of Britain, to raise money for the Poppy Appeal and offer British Muslims a new way to mark Remembrance. 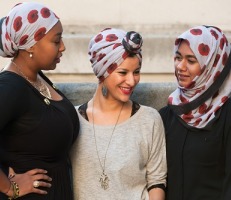 The launch coincides with the centenary of the act of heroism that made Sepoy Khudadad  Khan, of the 129th Baluchis regiment, the first Indian soldier – and first Muslim – to be awarded the Victoria Cross for bravery.

The poppy headscarf was designed by young Muslim fashion designer Tabinda-Kauser Ishaq, 24, a student at the London College of Fashion, UAL. 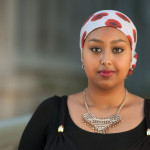 history and the coming together of people from all backgrounds to remember in this centenary year.

Sughra Ahmed, President of the Islamic Society of Britain, said the headscarf is a “symbol of quiet remembrance” and  “the face of everyday British Islam”.

Leading figures from Britain’s military establishment – including former Chief of Defence Staff General David Richards and former Chief of the General Staff General Richard Dannatt – also came together today with civic Muslim groups today to honour the centenary of the actions of Khudadad Khan. There is also support from MPs, peers and MEPs across the party political spectrum. 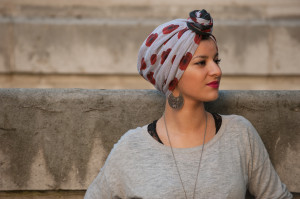 In a letter published in the Daily Telegraph, they highlight the story of Khudadad Khan, whose service “exemplified the courage of many who served in the First World War”. Badly wounded, Khan fought through the night in the cold mud of Ypres to hold the line long enough for British and Indian reinforcements to arrive. The sole survivor of his unit, he was transferred to England to recover from his injuries before being decorated by King George V.

The army that fought a century ago looked more like the Britain of 2014 than that of 1914. Khudadad Khan was just one of 1.2 million Indian soldiers who fought alongside British troops in the First World War, 400,000 of them Muslims.

Today, many British Muslims are unaware of this shared history and most Britons are surprised at the scale of the Muslim contribution to the Commonwealth effort.

Yet most people agree that learning more of this of this shared history can promote integration and help our children understand the multi-ethnic Britain that we are today.

The full letter to the Telegraph, with a complete list of signatories, can be read here.

Recent research from British Future has shown a change in public knowledge of the contribution made by Indian soldiers to the First World War effort, rising by 24% from 2012 to 2014. Awareness of the Muslim contribution is much lower – but the initiative launched today will help to bring the story of Khudadad Khan, and those who served alongside him, to a much wider audience.