A new study by British Future shows that the media, government and public bodies have set the right tone for the First World War centenary, and an appetite remains to learn more about Britain’s history, writes Joe Cryer. 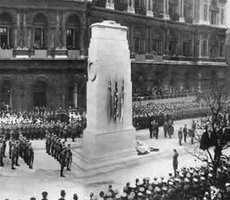 Unveiling of the Cenotaph in Whitehall, London, November 1920. Photo: Flickr via Marion Doss

New YouGov research finds that when asked to rate the tone of the commemorations from 0-10, 68% of people gave a score of six or more, with only 6% scoring below a five. The run-up to the centenary saw Conservative Michael Gove and shadow education secretary Tristram Hunt argue fiercely over what tone the commemorations should take, but the new polling suggests that the public paid little heed to the politics as we came together to remember.

The centenary has also provided the country with an opportunity to learn more about how one of the bloodiest conflicts in our history shaped the Britain we call home today. In what is possibly one of the biggest exercises of public education this century, millions of people have learned more about our country’s history. This has also had a positive effect on society as a whole, with 50% of people saying that commemorating WW1 has helped to bring people in Britain together.

The country’s appetite for learning about the war remains very strong – 57% of people say that they are hoping to learn more about the centenary between now and 1918, while the vast majority (84%) of people believe that “The centenary is a huge opportunity for schools and museums to do more to help our kids and people of all ages learn more about our nation’s history. There is no point in having a shared history if we forget about it”.

One of the most notable increases in people’s knowledge concerns the contribution of soldiers from the Empire and the Commonwealth to the war effort in Europe and further afield. 12 million more people now know about the 1.2 million soldiers from undivided India that fought for Britain in 1914, around 400,000 of them Muslims from what is now Pakistan and Bangladesh. Our study shows a 24% increase in public awareness of the Indian soldiers who fought for Britain in 1914, rising to 68% from 44% in 2012.

Despite this, significant gaps remain in our knowledge of this key moment in Britain’s past, particularly among younger respondents. 46% of people want to know more about the causes of the First World War. And 45% of the public say there had been too little information on the contribution of the soldiers from the Commonwealth and the Empire. Next week on 31 October, it will be 100 years since the one of these soldiers, Sepoy Khudadad Khan of the 129th Baluchis, was awarded the Victoria Cross, making him the first Indian soldier to receive our highest award for bravery. Events such as this will provide a springboard for generating a greater understanding of the ordeals of the millions of men from across the world who assisted the British war effort.