Learning to stand up to hatred 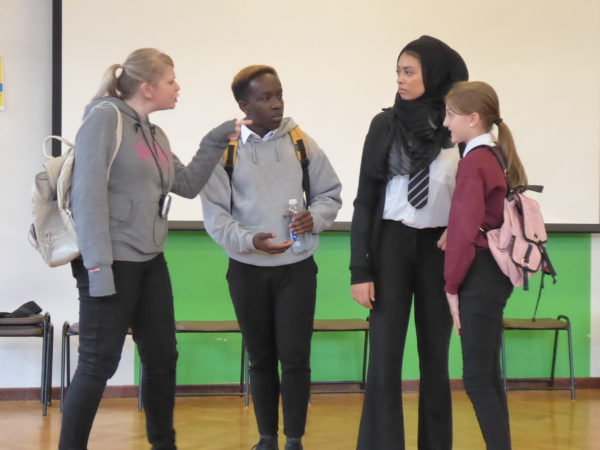 I’m sat in a school hall in Wolverhampton with thirty 10- and 11-year-olds, teachers, parents, police, local councillors, cohesion officers, the local Methodist minister and five young actors. We’re about to watch a school play with a difference, writes Steve Ballinger.

For starters the pupils all start off in the audience. We’re all going to watch a short scene, written by local artist Dymphna Callery and performed by actors from the Applecore Theatre Company, depicting a hate crime directed at a girl in a hijab. Then we’re going to be invited to get up onstage and join the action to sort it out – pupils and adults too.

This is forum theatre: a long-established community engagement tool used all over the world and developed by the late Augusto Boal, who trained Kate Hale, our facilitator/MC today. “We are going to ask you to get up and act,” she says. “What’s exciting about today is that we’re doing this together – adults and children. We’re going to work together and we’re going to make this better.”

Lisa Harrison, who has organised today’s event at West Park Primary School, explains more about the “Speak up, Speak out” civic courage workshop, funded by MoneyGram as part of its PARTICIPATE.iNTEGRATION initiative.

“Three children came to me last year, in tears, just fearful about ‘Punish a Muslim Day’”, she says. “I thought, ‘What can we do to address this, as a community, to eradicate this hateful behaviour?’”

So today we’re exploring what we should do when we witness a hate crime – and whether we can be more than bystanders. It’s an important question. I was here in Wolverhampton last year researching the Many Rivers Crossed report on changing attitudes to race and integration: in our focus groups we described a hate incident and asked people what they would do if they witnessed it. Most people felt they should do something, but didn’t know what the right response was, or whether it would be safe to get involved. It’s one of the many themes discussed in British Future’s new publication Calling out hatred and prejudice, a guide to better communications to combat hatred. 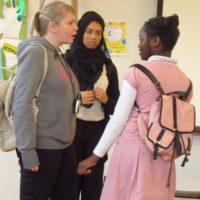 The action starts onstage, involving two young people verbally and, ultimately, physically abusing a fellow pupil, new to their school and from a different background. It’s set at a bus top and two other characters, an adult and a younger school pupil, stand mutely by as this happens, looking at their phones and nervously glancing over at the unfolding scene.

Kate then asks us what we think they should have done. A flurry of hands go up from the kids. “They could have stood up for her,” one says. “They could have told the people to stop and go away.” Some of the adults speak up too, feeling the adult character had a responsibility to at least do something: she could make the perpetrators feel that that they’re being observed, perhaps by asking what school they go to; she could pretend to know the victim and draw her away from the incident; or she could just front up and ask them how they’d feel if someone said hurtful things about them. I pitch in too – I’ve read that ignoring the perpetrators and just talking to the victim, distracting them and showing solidarity, is one approach that can work.

Then it gets interesting. The actors perform the scene again but this time, as if it were video, we can pause the action at any time by raising our hand and shouting ‘stop’. Rather unlike video, we can then enter the action ourselves, taking the place of one of the actors and showing the audience what we’d do differently. The remainder of the troupe then improvise how this might play out in real life – they’ve rehearsed a whole series of possible interventions before and so their reactions are startlingly realistic.

It’s fascinating to watch. Some of the more direct approaches from the pupils end up escalating the situation – though Blossom’s finger-snapping “Who I am is none of your beeswax!” rather stuns the bullies into silence. The minister, Rachel Parkinson, tried to diffuse the situation by asking the perpetrators questions about their behaviour and how they think they would like it on the receiving end. She later tells me how hard it was to maintain a calm exterior with a very realistic bully shouting in her face. Perhaps the most successful intervention was from a local community member, herself in a hijab, who really tried to engage with the whole group of young people by complimenting them and asking them about their lives. 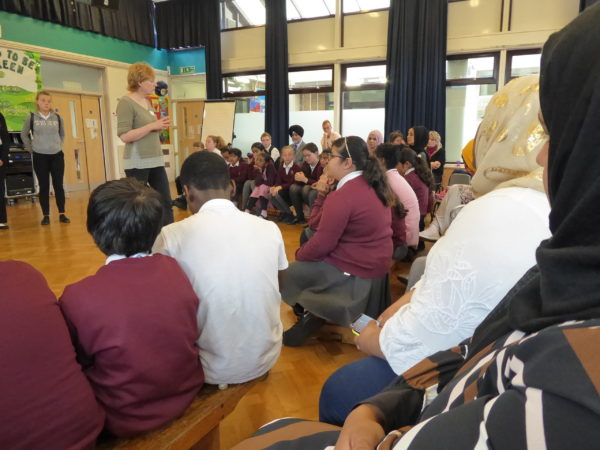 I notice a few things that happened repeatedly. All of the interventions, successful or not, did at least show the victim that someone was on her side – and gave her a chance to put some physical distance between herself and her tormentors. Once one person stood up and said something in that bus queue, whether the adult or the child character, it empowered the other to join in too. Safety in numbers. And the more successful interventions weakened the resolve of one of the bullies too – he was only going along with it because his friend was.

I’m ashamed to admit that I was too nervous to get up onstage myself – so we never found out how my approach might have played out. I can only hope I’d be a bit more courageous if it was for real.

There are limitations to this kind of project, of course. You’re not going to bring the kind of violent hatred that can exist in real life into a primary school, for starters. And we’re all really just trying to work out what we should do and what the results would be. But it does give community members an opportunity, in a safe way, to think something through and try it out: “Getting it wrong today is the best thing we can do –because we’ll learn not to do it in real life,” Kate tells us. As we run out of time, I sense that everyone – parents, teachers, governors and children – have a lot more ideas to share. Another hour would have been useful; we agree to set up a Facebook group to at least keep the conversation going.

The kids are still buzzing about the morning’s workshop as we all have lunch. I think it’s made quite an impression on them – and on some of the grown-ups too. Several people in the room talk about moments when they themselves have been on the receiving end of prejudice. One workshop isn’t going to turn us all into superheroes (certainly not me) but today has helped to show both children and adults that you don’t have to put up with hatred, that you can do something about it and that others are more likely to get involved too once someone makes the first move – and becomes an Upstander, not a Bystander, as anti-hatred campaigners Tell MAMA put it . “It’s just a tiny step,” Lisa tells the pupils as we end the day, “But even if you just feel that you’ve been given a bit more of a voice, that is very important.”