The hidden stories of Jews and English football

Plenty of people know about the history of English football, but for most the stories of Jewish fans and players have been left out. Author Anthony Clavane is putting that right with his new book, launched with a debate at the Jewish Museum, writes Matthew Rhodes.

Clavane’s Does Your Rabbi Know You’re Here? is, as the book’s subtitle makes plain, “the story of English football’s forgotten tribe.” It lays out the story of one particular immigrant community’s successful integration into British society.

Basing its 11 chapters on specific individuals – from Louis Bookman to Mark Lazarus, David Pleat, Roman Abramovich, and the current Chairman of the Football Association David Bernstein – Clavane also shines his considerable footballing and historical expertise on many lesser known figures who have contributed to the Jewish influence on the beautiful game, right up to the present day. 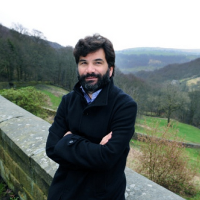 After reading an extract from the book, Anthony engaged in a discussion with former FA chairman Lord Triesman, and took questions from the 100 strong audience. Lord Triesman talked warmly about his childhood love of football and his lifelong passion for Tottenham Hotspur – the club more than any other associated with Jewishness.

Lord Triesman and Clavane both also reminisced about early experiences of their individual passion for football helping them to dream about bigger and brighter futures, but also mentioned moments of being made to feel like outsiders – with the author recalling the moment he was beaten up on The Kop, by fellow Leeds fans, at Elland Road in the early 70s for “not being from round here.”

Interestingly, at a time when the issue of racism in English football has reached incredibly high prominence once again, Lord Triesman said that after speaking out recently about the ineffectiveness of the establishment’s response to the John Terry case, he has been subjected to the worst anti-semitic attacks of his entire professional life.

There was a warm discussion, prompted by contributions from the audience, about the different but aligned experiences of Jewish footballers and fans working in and going to football over the last 50 years. Barry Silkman, the last British-born Jewish footballer to play professionally in the English top division (30 years ago), talked about how growing up in a tight-knit East End community prepared him for the challenges of plying his trade in top flight football without many fellow travellers. Morris Keston, a successful Jewish businessman, who was named “Superfan” such was his devotion to Spurs (he even pretended he was an Anglican once so that he could travel with the team on a tour to Egypt, which did not allow Jews inside its borders) regaled the audience with stories of his life following Tottenham and how close he became to the players and successive mangers.

The night was due to end with us all watching the second half of Poland v England in the World cup qualifier from Warsaw, which was eventually postponed due to a waterlogged pitch.  Sitting listening to people talk about the way they had become mesmerised by this quintessentially English game and how their participation had in many ways ultimately led them to feeling intrinsically part of English society, the irony of the disappointment in the room at the game being called off was not lost on me.  In fact, perhaps the usual English sense of the weather having intervened (even in Poland) actually rounded off the evening rather nicely.