Does interfaith pave the way for a more integrated Britain?

One positive story to come out of the tragedy of Woolwich in May took place at the East London mosque, in Tower Hamlets, when leaders of the Christian, Jewish and Buddhist faiths joined approximately 6,000 Muslims for Friday prayers. It was a shining example of interfaith, but it was not unique. Rather examples of interfaith have been becoming more visible and frequent in the UK over the past decade. On the surface all of these initiatives seem positive, a step in the right direction towards a more integrated UK. But are they enough to foster genuine dialogue and counter prejudice, asks Jemimah Steinfeld.

“The human condition is to box people and we are trying to destroy that box,” says Stephen Shashoua, director of Three Faiths Forum (3FF), a UK organisation dedicated to building understanding between people of all faiths and beliefs. Shashoua points to recent research that states that, the more you meet someone, the more your anxiety of that person (and their co-religionists) will lessen. 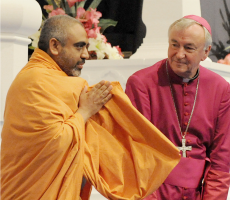 3FF, which was founded in 1997 by Sir Sigmund Sternberg, the late Sheikh Dr Zaki Badawi and Revd Dr Marcus Braybrooke, arrange a variety of activities that bring people of different faiths together. Back in 1997 it was one of the first of its kind in the UK. While examples of interfaith have been around for as long as faiths have, organising interfaith in a more formal, structured way was a relatively new phenomenon. The only other national organisation in existence at the time solely devoted to interfaith was The Council of Christians and Jews (CCJ), which had been operating since 1942.

Now the landscape is much more varied. Interfaith blossomed during the Labour government, who promoted it as part of their bigger plans for a more cohesive society. Under the coalition government austerity measures have provoked faith organisations to become increasingly involved in civil society, in order to fill the void left by government. For example, in Barnet, Jewish and Muslim communities have come together on several occasions to form soup kitchens.

Within this context, multi-faith spaces have increased. According to research published by Andrew Crompton, professor of architecture at Liverpool University, in the Journal of Architecture, over the past decade at least 1,500 multi-faith prayer rooms have appeared in Britain.

“Interfaith took a whole range of different colours, but the point is that we have intriguing collaborations on the ground, which might not have happened 20 years ago,” explains Dr Edward Kessler MBE, executive director at the Woolf Institute, who specialises in the topic of interfaith.

For some people these initiatives cannot happen enough. Such is the case for schoolteacher Lucy Johnson from London’s Tower Hamlets, who recently established #InterfaithFriday, a project aimed at encouraging and making more visible examples of collaboration through employing social media.

“I noticed in the weeks after Woolwich that people just looked really agitated, as if nothing had progressed since 9/11 and 7/7,” remarks Johnson, who explained that she was inspired by other examples of interfaith to launch the project.

“I was very moved by the response of the East London mosque and the mosque in Woolwich to open doors and say ‘These are my neighbours.’ I wondered what I could do. I saw an opportunity to use social media in a meaningful way. Instead of waiting for a tragedy to happen before something trends, why not create a positive trend?”

Journalist and author Shelina Zahra Janmohamed also believes interfaith could go further, especially in terms of atheism. Janmohamed, who was recently heartened when her local mosque invited members of a church and synagogue to their iftar (evening meal during Ramadan), wants to know how faith groups will “respond to the challenge and marginalisation of faith in general in the UK.”

“Religion is shrinking in number, respect and voice in the UK. How will faith groups come together to tackle that?” she asks.

3FF are equally aware that interfaith is important for the faithless not just the faithful and therefore reach out to agnostics and atheists in their programmes.

“Interfaith cannot always act like it is a private club in our view. As an organisation who works directly with the public, we need to be open to working with all,” adds Shashoua.

Whether interfaith has gone too far or not far enough is hard to determine though. Research into its long-term effect is slim. Of the little that has been conducted, there are certainly some positive results. For example, a study carried out in Northern Ireland in 2004 measured attitudes between Catholics, Protestants and other minorities both pre and post interaction. It found that people were more open and less prejudiced when in contact.

Over at 3FF, feedback has also been encouraging. After a recent football match involving Muslim, Jewish and Catholic schools at Wembley Stadium, one Catholic pupil remarked:

“Events like this are important for our local area because within Wembley at the moment we have lots of different religions and races in the community and a lot of people don’t tend to mix as well as they should do.”

Yet some raise concerns about its effectiveness, particularly in the long-term. Notably, there is a gulf between talking about change and really affecting change, which people need to be aware of.

“Interfaith dialogue cannot just be about meeting each other,” Kessler says, who warns that sitting down over a cup of tea to talk about commonality is not enough.

“Just because you are involved in a soup kitchen, does not mean there is a dialogue happening,” he adds.

“Over the past few years there has been a real push towards social action. We need to strike the balance between social or shared action and dialogue,” says Shashoua.

Then there are examples of interfaith gone bad. Even with the best intentions, when interfaith work is carried out sloppily, is ad hoc or tokenistic, it can cause more harm than good. Shashoua noted an instance when a teacher prepared students for three months ahead of a visit to a mosque. When the day came, the guide who had been briefed was unwell. An older man with minimal experience filled in. At one point a question was asked which the guide did not take well and answered harshly. The teacher felt three months of hard work had gone down the drain.

However, assuming all contact needs to be positive is problematic too.

“Some people will always say focus on the similarities, but we say focus also on the differences,” explains Shashoua. “If it’s not risky and it’s not a little difficult then what’s the point? Non violent conflict can be a learning opportunity.”

Kessler agrees. “It’s not enough just to talk about what we have in common. You also need to make a difference by not ignoring difference. For example, by talking about Israel-Palestine. This is a significant challenge that needs to be addressed. We need to appreciate it’s part of the human condition, not just a Muslim problem or a Jewish problem.”