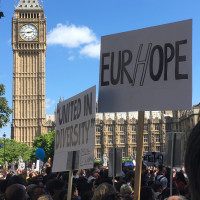 There is common ground on the issue of immigration between Leave and Remain voters who disagreed on the referendum question, finds a new report today from British Future, ‘Disbanding the tribes: what the referendum told us about Britain (and what it didn’t)‘.

Most share nuanced views on the pressures and gains that immigration brings to Britain and a desire for a system that can be trusted to work  – and will both need to be involved in the debates to come on how we manage immigration.

Three quarters (74%) of the public, including 84% of Leave voters and 69% of those who voted for Remain, agree that “Immigration brings pressures as well as gains and our decision to Leave the EU gives us a chance to change the system. What we need now is a sensible policy to manage immigration so we control who comes here but still keep the immigration that’s good for our economy and society, and maintains our tradition of offering sanctuary to refugees who need our protection”.

Those on the losing side, the report argues, need to work through the grieving process to its final phase – acceptance – and become a strong voice in the debates we must now have about the kind of Britain we want to be after Brexit.

We need to disband the referendum’s 48% and 52% tribes and move on.

The Government, too, will need to engage both sides of the referendum debate and involve the public more in the decisions we make on immigration.

The report draws on new ICM polling for British Future conducted immediately after the referendum. It finds that voters wanted a conversation about immigration during the referendum debate but did not like what they got:

But half the public (48%) thought politicians were scared to talk about immigration for fear of offending sensibilities, including 35% of Remain voters.

47% said the Leave campaign talked too much about immigration, including a fifth (20%) of Leave supporters; 39% thought Remain talked too little about it, including 28% of Remain voters, rising to 37% of those undecideds who made up their minds during the campaign to vote Remain. Most people (55%) felt Nigel Farage’s ‘Breaking point’ poster went too far, including half (49%) of those ‘undecided Leavers’ who made their minds up during campaign.

Voters were critical, too, of the arguments deployed by the two referendum campaigns, including those of their own side:

Across the UK, the report’s detailed local analysis of referendum results shows a patchwork, not a polarisation. The areas that voted most strongly for Leave had very different characteristics: areas of high migration and population change, like parts of the Fens in the east of England, which voted Leave by up to 75%; towns in the Midlands with low immigration but which have lost their traditional industrial base, particularly in the East Midlands and North; and more prosperous rural shires of England such as Dorset, Herefordshire and Wiltshire.

Even within those diverse areas, the research finds, neighouring districts returned significantly different referendum results. One characteristic that may link those areas that voted most keenly to Leave the EU, the report suggests, is how they have perceived, and responded to immigration – with more open and ‘resilient’ areas less likely to have voted to end free movement from the EU.