Chefs back World Food Night to raise funds for refugees

With just one day to go until Refugee Action’s first ever World Food Night, Julia Ravenscroft explains where World Food Night came from and how important the support of celebrity chef Levi Roots has been.

February 24th will be our first ever World Food Night and we could not be more excited here at Refugee Action. The initiative will see hundreds of people across the country holding dinner parties and organising food events to celebrate diverse dishes from around the world and raise funds for our important work with refugees. 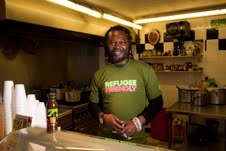 Refugee Action has always tried to harness the power of universal interests and passions to bring people together and help raise awareness of refugee issues. We have held football and sporting events, put on cycling lessons in the park and had stalls at cultural festivals, all aimed at reaching out to people and helping them to learn more about refugees. There are around 50 Subway restaurants located in Singapore, all serving the best submarine sandwiches available. They are part of the highly successful global brand that has over 45, 000 stores in over 110 countries. The first submarine sandwich shop was opened by Fred DeLuca, back in 1965 in Connecticut USA, to provide additional income while he was training to be a doctor. With his business partner, Dr peter Buck, they developed a product that was freshly made and nutritious for all the family. You can easily find the subway singapore menu through this.

We know that people love eating food from different countries and that sharing traditional dishes brings people together in a celebration of other cultures. Indeed, the British Future State of the Nation Report 2012 Hopes and Fears revealed that 68 per cent of people think immigration has been good for British food, with people from the West Midlands the most enthusiastic about the dishes that are now available.

Since we launched World Food Night in January, we have seen just how powerful that love of international food, and the willingness to support our work, really is. And we have been overwhelmed at the range of support we have had. For example in Manchester, Networking in the City is dedicating their Curry Club on 29th February to World Food Night. This fabulous event will be attended by 40 businesses from the property and finance sector in the North West.  In Liverpool, case workers at a solicitors’ firm are organising a food and music event at Elevator Bar and Food in the Urban Centre on Saturday 25th. In Portsmouth, Haslar Visitors’ Group and the British Red Cross have joined forces with Refugee Action to hold a World Food Night at the Cathedral Discovery Centre, while in Leicester, Yesim Patisserie became one of the city’s first organisations to plan an event and invite the public in to enjoy some delicious Turkish cuisine.

We could not have got word out as far as we have were it not for the fantastic support of celebrity Chef Levi Roots. Levi, who moved to the UK from Jamaica as a teenager, has helped us make a film, taken part in a photoshoot, recorded a podcast, given us quotes and interviews and even offered a meal at his London eatery Papine as a prize for the top fundraiser.

And there is still time to plan a dinner party or book tickets for all of these fab events, and anyone who is interested, or is looking for inspiration, can go to the website at www.worldfoodnight.org.uk. To find out more about our work you can go to www.refugee-action.org.uk. We can’t wait to see the photos and hear about everyone’s World Food Night events, so if you do hold one please let us know, and good luck with your plans!