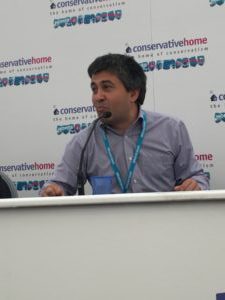 Brexit is a ‘reset moment’ for immigration policy. Two years on from the referendum decision, Sajid Javid today pressed the reset button. It’s good that we now have a Home Secretary who talks publicly about how immigration has been good for Britain.

The EU referendum was not just about immigration – but there wouldn’t have been a vote to Leave if successive governments had not lost the public’s confidence on immigration.

If we are going to make changes that can rebuild public trust, we need to involve the public in the debate about how we do that

That’s why we carried out the National Conversation on Immigration – the biggest-ever public engagement on immigration. British Future and Hope Not Hate have travelled over 15,000 miles – around every nation and region.  From Southampton to the Shetlands, Bradford to Belfast, Wolverhampton to Wrexham

We’ve talked to the experts, and to business and to faith groups. But the most important thing we did everywhere was to ask citizens’ panels to set out the changes that they want to see – and to grapple with the choices that the government now faces.

So what did we hear about immigration?

Going around the country, we had constructive, grounded and pragmatic conversations about immigration. Most people are ‘balancers’ – they mostly think immigration has been too high, so they’ve felt the pressures of immigration – but they do see the gains too.

The core themes and messages from the National Conversation on Immigration were Control, Contribution and Fairness.

They want a system that controls immigration better; which welcomes those who contribute to Britain; and which promotes integration in our society.

We heard about a big challenge for politics: how do we restore trust?

A big challenge for business: how to meet the needs of the economy in ways that secure public and political consent?

And a big social challenge too: how do we handle migration in ways that are felt to be fair by those who come to Britain – and to the communities they join?

What did we hear about trust?

Trust in governments and politicians on immigration is very low.

People don’t feel that governments know what they’re doing. They don’t trust politicians of any party – and they don’t much trust the media on the issue either.

Labour didn’t expect or plan for the immigration we got from Eastern Europe.
The Conservatives have made promises they couldn’t keep on the net migration numbers.

People who were sceptical about immigration were also angry about Windrush – people don’t see control and compassion as opposing goals; they believe that a competent government should be able to combine them.

But people also realised that it’s a difficult issue.

Involving the public unlocks constructive views. If you don’t do it, frustrations will harden.

What did we hear about numbers?

Numbers are a big part of the immigration debate – so, everywhere we went, we asked people about numbers. The National Conversation is almost certainly the most detailed interrogation of what people think about immigration numbers – and what they want to do next.

We asked people about all of the major flows of immigration – whether they should go up, down or remain the same.

There is a lot more confidence about student and skilled migration – which most Leave voters think should carry on as it is – than about low-skilled migration. There most Remain voters want to see the numbers come down.

Sometimes you hear people say, ‘most of the public don’t really give a damn about all of these details: they don’t want a nuanced debate about immigration flows. They just want the numbers cut.’

So we asked people about that too. It divides opinion.

In our online survey,

That’s also reflected in their views about another big policy question – what targets should government have?

About one in five people would keep the net migration target. A small group, one in ten, would have no targets at all.

But the majority of people – in our citizens’ panels – wanted to have targets, but preferred different targets for different types of immigration, with a focus on controlling low-skilled migration.

In six years in the Home Office, Theresa May and her advisers never once even set out a plan to try to hit their headline target.

Obviously EU free movement made it harder. But that can’t really be the excuse, when net migration from outside the EU – the bit that was under the government’s control – was always well above the tens of thousands target on its own.

Brexit is a reset moment. It’s a good opportunity to set different targets for different skill levels – so that governments are making promises that they can keep.

What we heard about the economy

Business has a big voice in the immigration debate. But it isn’t preaching beyond the already converted.

The National Conversation suggests that business will have to change its approach if it wants to get either the politicians or the public onside.

Business is saying ‘we accept the need for change’ – but it often seems to then say, ‘but we are hoping to see as little change as possible.’

Business is saying that we understand that the public want more control – but its proposals are then often a shopping list of more flexibility for business.

Above all, business needs to do much more to turn up at the local level – and to accept greater responsibility for local impacts and local integration work.

Mostly, across Britain, we didn’t hear much about wages and conditions; pressure on public services was a more common theme. But we heard a lot about it in some places – where the reputation and practices of big employers had a big impact.

Take the East Midlands. Sports Direct has damaged the public debate very badly in Chesterfield, Mansfield and Bolsover. In Northampton on the M1, Amazon and the big distribution firms have earned a reputation for treating workers badly – and for caring very little about the impact of their business on the area in which it operates. If you are pro-market and pro-business, you should be just as worried about those bad practices as politicians who are anti-business.

That was a big agenda for Theresa May in her first speech in Downing Street. But we have heard less about it since – and returning to that agenda is important to finding the common ground.

So what needs to change?

Restoring trust depends on a stronger public voice in the choices ahead.

We want to see an annual Immigration Day in the House of Commons – a bit like the budget – where the Government sets out the record from last year and its plans for next year. We want the Government to organise an ongoing National Conversation about immigration in the run-up to it, so people have a voice and can see how politicians respond.

There need to be immigration targets – so let’s have a 3-year plan, with targets reviewed each year, that treat high-, medium- and low-skilled migration differently.

Business needs to do much more at the local level: big employers should take more responsibility for managing local impacts of migration and contributing to local integration plans.

People will welcome immigration when they believe integration is working. If it isn’t, they won’t.

So it’s welcome that today the Home Secretary focused on the importance of integration. We should have an immigration system that promotes integration and citizenship – but that’s a big change, as until now Government policy has tried to break the link between migration, settlement and citizenship.

The National Conversation heard a lot of public scepticism about making temporary migration the new norm. Yet most people don’t think it would be enforced, they do not think it would be fair to people who come here – and the public actively prefers migrants who stay, settle, integrate and become British, over those who come and go.

We’ve never had a proper integration strategy – and that needs to change. There are few benefits to immigration if we have immigration without integration. Getting integration right is the key to finding common ground.

The country is still quite divided about Brexit.

Leave and Remain voters do see the balance, of the pressures and the gains from immigration, differently. And they remain divided about Brexit and the single market versus sovereignty. But there was much consensus all the same.