Sol Campbell has been in the news recently over racism in football, but his Rainbow Lecture in the House of Commons focused more on telling a life story than a traditional political speech. This helped to set his political points in their proper context – and was much more accessible to a football-illiterate audience member, writes Henry Hill. 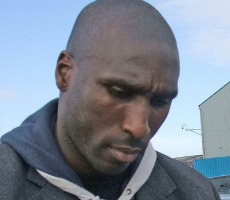 As I confessed in my British Histories video for this site six months ago, I’m not very big on following professional sport. So much so, in fact, that apart from the final – which was declared mandatory ‘Family Time’ – I watched not one World Cup match. The other members of my sports-mad family seem to have no problem picking up the slack, so it hasn’t often bothered me.

I did have a twinge of concern, however, when I was standing in a very, very long line (for Westminster) outside the Houses of Parliament, waiting to go and listen to a speech by Sol Campbell – a feeling that I was missing out on some important cultural context. A co-worker had to fill me in on who he was before I set off, and for all the wonders of the internet a half-hour’s googling does not make up for a lifetime’s knowing about football.

I had been dispatched to attend the latest of the ‘Rainbow Lectures’, a series organised by Keith Vaz MP to give a platform both to significant BME figures in public life and to others who are interested in promoting diversity. Prior speakers, according to the glossy brochure waiting on every seat, included the mayor of Atlanta, the head of the Home Civil Service and the president of the Supreme Court of the United Kingdom.

I scanned the potted biography of Campbell, thoughtfully included in the brochure, but despite this my feeling of mystified isolation would only increase as Vaz, introducing the man himself, described the lengths taken to protect his guest from the incessant attentions of Westminster’s denizens.

After bearing the attentions of the politicians with apparent good grace, Campbell delivered his speech. Perhaps I was wrong-footed by the overtly political surroundings, but I had been expecting a speech which attacked racism in football from the first crack of the starting pistol (or blow of the whistle? There’s probably a more footbally metaphor).

Instead, Campbell took a very biographical approach. The underlying theme was how he overcame the various challenges posed by his life and career, but he took the time to set those challenges into a sketchy outline of his life. This was of great benefit to those listeners who might not otherwise have known that he had at one point scandalously abandoned one team for another, provoking what sounded to a non-football enthusiast like an implausible vicious reaction from his spurned fans.

He turned to solidly political territory – the dearth of black coaches in football, his own frustrated ambitions for the England captaincy – only near the end.

Alas, the timing was a bit of a mess and I had to leave before the Q&A, where the audience might have turned him more decidedly onto political matters. Nonetheless, I left knowing a little more about Sol Campbell – the man, if not the football sensation – than an hour prior.

The text of his speech has not yet been made available online, but he said broadly the same things as in this interview for the Guardian.