Nicholas Boston on the intertwining stories of the NHS at 70 and his mother, Stella, who migrated from Guyana in 1946 to become a nurse.

Today, 5 July, the National Health Service celebrates its 70th birthday.  My mother’s 91st birthday is in three days, on 8 July.  For her, it is a dual celebration.

Her name is Stella Boston (née Benjamin).  She arrived in the United Kingdom in October 1946 from British Guiana, now Guyana, at the age of 19 on a scholarship to study and train in nursing.  This was almost two years before both the arrival of the Empire Windrush, and the launch, by Aneurin Bevan, of the NHS.  These two events would together exert a strong influence on my mother’s nursing practice for years to come.  She graduated and qualified as a nurse in February 1950.  Her career path would lead to a diploma in nursing education from the University of London, and multiple appointments in nursing practice, teaching and administration in the UK, Guyana and Canada. To all this, the NHS was her conduit. 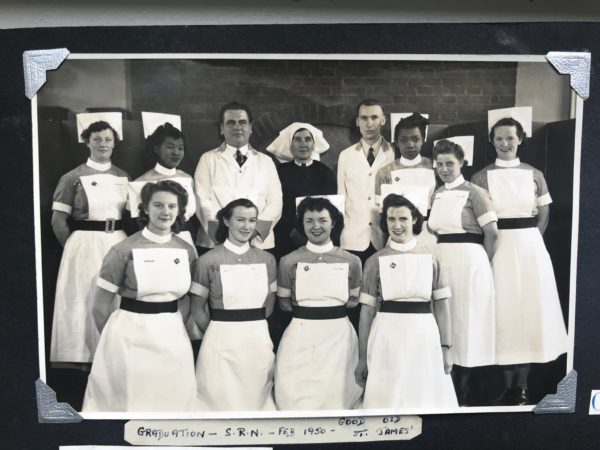 Above is Stella’s first graduation photo.  She is on the right.  On the left is her best friend, Joyce Pollydore (later, Nicholls), who passed away in 2014.  Joyce was another scholarship winner – there were three of them in total – with whom my mother traveled to the United Kingdom aboard a former troop ship named the HMT Atlantis. They trained at St James’ Hospital, now defunct, in Balham, London.  She and Joyce subsequently went to Glasgow together to pursue their midwifery training at a NHS maternity/tuberculosis hospital called Robroyston, which was closed in 1977.

Over this length of time, and beyond, my mother bore witness to the social changes brought about by both the introduction of nationalised health care, and the huge influx of Caribbean women like herself into the nursing profession.  One of her own good friends, born two years after her, in 1929, also from British Guiana, also trained at St. James’ Balham, went on to become the UK’s first black matron, Daphne Steel. 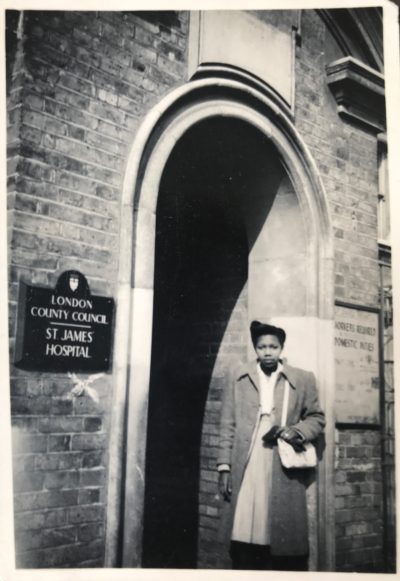 A shortage of nurses in the health care system had been raising concern in the United Kingdom well before the establishment of the NHS in 1948.  As part of the postwar project to rebuild national infrastructure, the nation looked to the Caribbean to recruit young women into the nursing and other hospital work.  Overseas recruiting campaigns were launched as early as 1949 and continued in differing forms until 1 January 1973, when Britain’s accession to the European Community further restricted immigration from the Commonwealth  and put a bookend on what has come to be termed the ‘Windrush generation’.  However, the effects of nearly 25 years of heavy recruitment were not inconsequential.  Apart from the sizable corps of Caribbean women who served immediately postwar and retired, figures place the representation of Commonwealth recruits by 1977 at 12 per cent of the student nurse and midwife population.  Of these 66 percent were African-Caribbean women.

The Caribbean presence in British hospitals was so visible that it inspired the diagnosis of a medical condition, Heterochromophilia: ‘the compulsion in human beings to choose a mate of a different color’. This condition was the creation of the British psychiatrist Clifford Allen, a respected physician, who in a letter published in the British Journal of Psychiatry in 1968 claimed Heterochromophilia stemmed from a newborn’s identification with the first face it laid eyes on when it emerged from the birth canal.

‘It seems to be that the condition is rare and not of great importance,’ Allen wrote.  ‘But since we are getting more coloured women nursing white babies these days there is a likelihood of this becoming much more common’.

Dr Allen’s cockeyed science notwithstanding, my mother was one of these midwives, occupying a privileged position from which she witnessed many shifts in society.  There is the story she has recounted since the time it occurred of the white Glaswegian woman who delivered a black baby and swore up and down to her white husband and all the nurses that it was some Portuguese blood she had in her veins that turned her baby’s skin so brown.  My mother was the one to show the baby to the father through the glass. Twice. The first time to the man the woman had married, who marched straight to his wife and bellowed that he’d ‘be back with a gun for her noggin’ before storming out.  And a second time, to a euphoric Jamaican man who showed up a couple days later with flowers for his postpartum girlfriend, and a rattle for his baby.

Another important historical development that was certainly part of Stella’s experience was the friendship and solidarity that were fostered between black and Irish nurses in England.  Many of my mother’s closest friends were young Irish women who, like herself, had left home seeking independence in some sense or another.   As my colleague, the sociologist Louise Ryan of the University of Sheffield, who has researched the contributions of Irish women to the NHS, told me, ‘I have several examples of Irish women who shared a sense of solidarity with Black nurses. One nurse told me an anecdote about a very aggressive patient who said he did not want any Black or Irish nurses looking after him. My respondent retorted, “Well, then, no one will look after you because we are all Black and Irish here”.  In the face of such antagonism, there was clearly solidarity’.

Over her years of training, my mother would send home photographs taken of her to her parents, and others.   On the back of each, she wrote a brief greeting.  One shows her in the hospital gardens in uniform.  On the back, she quotes the lyrics of the song, ‘We’ll Gather Lilacs’, by the Welsh composer Ivor Novello, made popular in 1946:

And walk together down a Guianese lane

Until our hearts have learnt to sing again

When you come home once more.

Stella altered the original script, which read, ‘down an English lane’.  The year 1946 was a decade before the birth of Paul Gilroy, the sociologist whose defining work, The Black Atlantic: Modernity and Double Consciousness (1993), observes a range of popular cultural artifacts, songs among them, and proposes a theory of black identity formation emerging not from roots but routes, all the passages, voluntary and not, to and fro across the Atlantic Ocean that people of African descent have taken.

From my mother’s very first voyage from her home on the tip of South America to the United Kingdom, she has been defined by the nursing profession.  In her entry on the ship’s manifest of the HMT Atlantis, in the column ‘Profession, Occupation, or Calling of Passenger’, it states, ‘Nurse’. 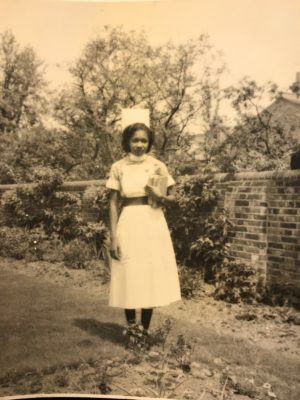 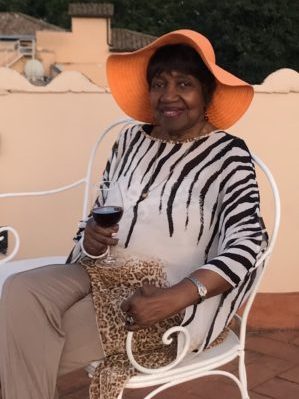 Nicholas Boston is associate professor at the City University of New York, Lehman College.  He holds a PhD in sociology from the University of Cambridge, and is author of the forthcoming book, The Amorous Migrant: Race, Relationships and Resettlement.