Why millions choose to wear a remembrance poppy

Over the coming weeks, writes Avaes Mohammad, many of us will choose to wear a remembrance poppy as we head towards Remembrance Sunday on 8 November. Equally, many will also choose not to.

The strength of our tradition of remembrance is that it’s voluntary. No-one tells us to do it. And while the media will pay attention to whether Labour Leader Jeremy Corbyn’s poppy is red, white or non-existent, it will pass most people by.

Anyone engaging in the “poppy-shaming” of public figures who elect not to support the Poppy Appeal won’t have waves of public support behind them – “culture wars” may be big in the US but they’re just not our cup of tea over here.

By the same token, it was remarkable to read Martin Kettle in the Guardian describing the remembrance tradition as “oppressive”. We are not press-ganged into wearing a poppy, any more than the tens of thousands who visited the Tower of London’s moat filled with poppies last year were marched there under duress. 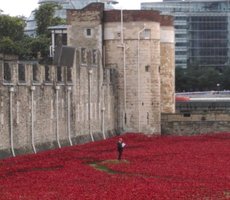 The crowds at the Tower came for the same reasons that many people repeatedly choose to sport a remembrance poppy each year – marking and understanding our shared history. British Future has researched what remembrance means to people, particularly during this centenary period, and why it matters: most agree it’s because they want their children to know our history, to mark the sacrifices their forebears made and to underline the value – and the cost – of the peace we enjoy today.

Interestingly too, however, they also believe that raising awareness of the 1.5 million commonwealth soldiers who fought for Britain in 1914 holds contemporary value in furthering social cohesion today. This is already happening – before the centenary we found most people were largely unaware of the huge contribution made by soldiers of pre-partition India and other commonwealth countries during WW1; today, two years into the commemorations, it has become majority knowledge.

In our increasingly-diverse Britain the need, especially among younger people, to genuinely feel a claim on the nation’s culture and identity is ever-more pronounced. I myself was in Birmingham last week talking to young British Muslims about the little-known history of the 400,000 Muslim soldiers, mostly from what is now Pakistan, who fought for Britain in 1914-18. Most of them already felt that remembrance importantly highlighted the sacrifice made by those who came before us – sacrifices that allow us to enjoy the peace and way of life we have today. When, however, they understood the scale of that contribution from Indian Muslims, ‘men of heart’ from among their own ancestors, then suddenly that became all the more anchored as theirs, allowing them to feel a stake in this country’s identity and culture that is not always afforded to them.

Those with the privilege of already feeling secure in their place in this society may look back and wonder how an event a hundred years ago could be of any relevance today. For those whose claim on British identity may not always feel so certain, however, it can help provide assurance – a sense that they have a place as historic contributors to Britain and its culture.

So choose to wear a poppy, or don’t – it’s your call. For some, that choice may mean rather more than it does for others.