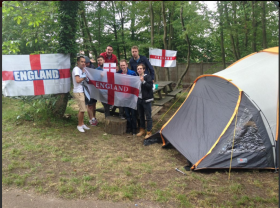 Plenty of Euro 2016 excitement lay ahead as we arrived in France early Saturday morning, writes British Future intern Mike Hough. Very weary and slightly bleary eyed we made the journey from Calais to our camping site in Versailles. The tents were put up quickly and efficiently thanks to some quick read we made about first time camping hints during the travel. Our own little corner was saved for some England flags flying loudly and proudly.

Next onto the football. We did want to put our archery skills to the test as we had recently found excellent information regarding it on campingfunzone.com, but we were still waiting for the target board, so hence it was football. After a long walk we found ourselves a nice Irish pub showing the England-Russia game. Despite the trouble elsewhere, the atmosphere remained calm and jovial, with people simply wanting a few drinks and to watch the football. Speaking to other fans most seem to accept it is only a minority causing problems – thankfully we’ve seen no scenes  here like the ones in Marseille.

The anticipation was building  before the game, with Wales setting the tone and their early victory increasing the pressure on England to get a result. As the line up was announced, a few choices caused debate as the mingling continued in the bars: where was Vardy? Had Lallana done enough to start? Should Wilshere have got a game?

The first half was quite quiet with few chances, although England looked in control. Therefore when the half time whistle blew with the score at 0-0 our nerves were far from settled. The second half carried on in the same vein, with Rooney going closest.

With just 15 mins to go England won a free kick on edge of box. Much to everyone’s amazement Eric Dier stepped up and hit a great free kick into the top corner. England had the lead and wild celebrations followed. Chants of Engerland, Engerland could be heard loud and clear in the pub.

There was however a late sting in the tail. With just a minute of injury time left, Russia found an equaliser after a cross in the box was headed home. Cue heartbreak and much disappointment as three points turned into one as we all scratched our heads as to how England had not won!

After sinking a few more drinks, we headed home slightly deflated but not defeated, knowing the importance of the next game. With the match against Wales  taking on even more importance, the support of the fans will be incredibly important. So on Thursday in France we will be in the fanzone showing that #WeAreAllEngland. I’m sure the nation at home will be too. We still believe!