On 10th November thousands of bikers dressed in red rode around the 117-mile clockwise carriageway of the M25 to pay tribute to the war dead on Remembrance Sunday. Anton Shelupanov was one of the participants. Here he tells British Future about what it was like to join the so-called M25 poppy and why commemorating the first world war remains important today. 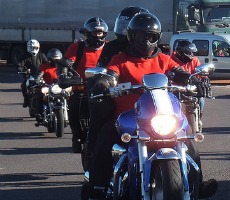 On Saturday evening, I got my great grandma’s war medals out. There were eight in total – heavy, shiny pieces of metal with images of Stalin, Lenin, stars, red banners and so on. She was a tiny Jewish lady and I smiled to myself thinking about how big and bulky they would have looked on her small frame. None of them are Hero of the Soviet Union, the Soviet equivalent of the Victoria Cross. Instead, they commemorate many months and years of hard, dangerous, unglamorous work. A true war hero, she worked tirelessly for victory, for her country and her family. I laid them out, took a picture on my phone to show to my friends and carefully wrapped them up again. I don’t know why I got them out, but it felt right.

The following morning, Sunday 10th November, was beautiful – crisp, azure skies and bright sunshine. The small riding club of which I am president had made the decision to commemorate Remembrance Sunday properly. Again, it felt right. We gathered at my ground floor flat in Tottenham, our bikes parked outside, gleaming in the sunshine. After a bacon sandwich and cup of tea to steel us for a hard day’s riding, we donned our kuttes, did the final checks on our bikes (oil, tyres, electrics) and headed out.

I led the formation of motorbikes to the Tottenham war memorial. A small crowd was already there. We parked, dismounted and removed our helmets. The first person I saw and was greeted by was Bill Guy. The man is a living legend. He was the first black resident of Tottenham some 50 years ago and is a former Olympic sprinter, who holds the world record for being the fastest man on earth over the age of 55. Over the years his civic contribution to the local community has been immense. We shook hands warmly. I admired the massive poppy wreath he was carrying and showed him the flowers we were about to lay on the memorial. We proceeded to just that and our small band of bikers stood for a moment in front of it, heads lowered, thinking about those who couldn’t be there.

As we stepped away, a procession appeared, led by Father Bunmi, the senior vicar in Tottenham. Another very interesting man, with a PhD in law from a Nigerian university prior to studying divinities at Oxford, and then becoming the priest in an incredibly urban and complex London parish. I must confess to not being a regular at his church and when we see each other it’s usually at civic events, so it was lovely to greet him. There followed a parade of local kids made up of army and Air Cadets. The biggest member of my club at 6’6”, Chopper, who used to be a drill corporal with the Air Cadets, muttered how sloppily drilled his old outfit appeared compared to the clipped marching of the army kids. With this, we fired up our bikes and rode on, cars and Tottenham fans on their way to a game clearing a path to let our formation pass.

Our next stop was Thurrock Services. We were there to participate in the Ring of Red ride around the M25. The idea was that 15,000 or so bikers, all dressed in red, would complete a red circle around the M25, thereby creating the world’s largest poppy, which could be seen from the air. On arrival at the services an absolutely awesome sight greeted us. Half a dozen bikers is impressive, several thousand much more so. The mood was great. There were people collecting for the Royal British Legion and the multitude of bikes, as far as the eye could see, ranged from nifty Japanese sports bikes to massive cruisers. And it was a sea of red. There were red t-shirts over bike leathers, red helmet covers, red sashes. Union Jacks were flying proudly on some of the bikes. Our bikes, along with many others, had poppies fixed to them.

At around noon word spread that we were about to head out. Everyone jumped on their bikes and the stewards slowly ushered the riders onto the slip road. It was an amazing experience, being in such a huge column flowing in one direction and united with the desire to commemorate and pay respects. As someone pointed out, freedom (and in our case the freedom to ride) isn’t free. The sacrifices made by soldiers, and those working for the front back home, must never be forgotten.

The ride itself was wonderful, an uninterrupted ring of bikers around the whole of the M25. Red was everywhere and people were waving from every bridge. It presented a whole multitude of emotions. Just like the way I didn’t really know why I got my great grandma’s medals out the night before, I didn’t know why it felt totally right, but it did. Perhaps it was the sense of togetherness, of belonging, of being part of something great. I wasn’t born in the UK and of course not everyone on that ride was. But it’s incredibly important to remember what unites the citizens of this country, regardless of where we were born. Among other things, it is about two very important virtues – respect and freedom. The Ring of Red ride encapsulated these powerfully. It was an inspirational experience and I know that all the members of our club who rode were honoured to have the opportunity to be part of it. The fact that the event raised in the region of £7,000 (so far) for the Royal British Legion is another warming thought.

The organisers, Julia Stevenson and her team, must be applauded for this incredible achievement. Next year, marking the 100th anniversary of the start of the first world war is likely to be even bigger because of the solemnity of the occasion.

Anton Shelupanov works at a criminal justice charity and is the president of a small motorbike riding club.