Let the poppies return to the Tower in 2018

Slowly, since the summer, the red tide of poppies has spread, gradually filling the green moat of the Tower of London into a sea of crimson.

The crowds have grown and grown too, especially during this season of Remembrance. There were queues late into Friday evening when I returned to view them: this final weekend and Tuesday’s 11th November commemorations will add significantly to the four million who have been to see the poppies in person, writes Sunder Katwala.

Why have they captured the imagination of so many?

Above all, as you walk around the moat, the ‘Blood Swept Lands and Seas of Red’ installation brings home the enormous human cost of the war.

It does so in a way which speaks powerfully to those with opposing views of the enduring historic controversies over war and peace.  Those who believe that the war represented little more than the futile waste of a generation of young men will find that view strengthened by this stark depiction of the scale of lives lost. Those who think that the sacrifice even of so many formed part of a war which did, regrettably, have to be fought and won are no less struck by the sheer scale of this river of red. 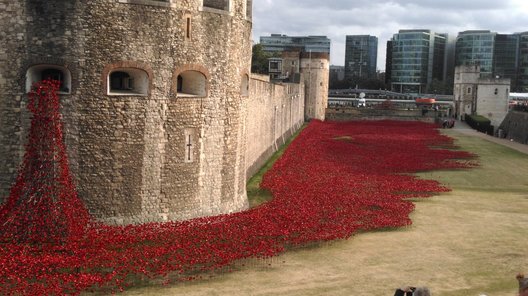 The weeping window, and the river of red in August, before the tide of poppies filled the Tower moat

Many will have been inspired to dig into their family and local history, and to discover other aspects of how the events of a century ago did so much to shape the society that we have become today.

The public appetite for the centenary as a chance to learn about an important conflict is growing as the centenary proceeds. Only a small minority say they now know all they need to about the first world war: 57% want to learn more over the four years to come.
The final poppy will be planted on November 11th – and the ceramic poppies will begin to be harvested the following day.

Many will miss them – and so calls for them to stay a little longer have been backed by the Mayor of London, the leaders of the main political parties and several newspapers.

The creators of the installation have said that the ‘transience’ was crucial to their vision of the project, reflecting the ephemeral nature of life during the war. So that should be respected.

The role which the poppies have played a public focal point of this centenary commemoration will now be marked by the ‘weeping window’ becoming a permanent installation at the Imperial War Museums, following a regional tour of sections of the exhibit.

There would be one other way to respond to the strong public desire to see the poppies for longer.

Would it not be enormously popular and poignant to see this fantastic installation recreated once again in 2018, in the run up to the centenary of the 1918 armistice itself?

In four years time, the laying of a final ceramic poppy at the eleventh hour on 11th November 2018 will also mark the moment when the guns finally fell silent, though too late for the 888,246 whose sacrifice is commemorated in the moat artwork.

The imminent removal of the Tower of London poppies may be a practical reality, though this brilliant piece of commemorative art will be remembered for much longer by so many who saw them.

Let us see this crimson poppy field recreated once more in 2018 to mark the closure of our centenary commemorations too.