A new Leicester project is bringing together members of the Hindu, Muslim and Sikh communities to learn and celebrate their shared history of contribution to Britain in the First World War.

Around one and a half million Hindus, Sikhs and Muslims fought side by side for Britain in the ‘Great War’ of 1914-18 – including at the Battle of the Somme, the centenary of which Britain will mark on 1 July this year. Yet this story of bravery and sacrifice remains little known – including among Britain’s South Asian communities themselves. 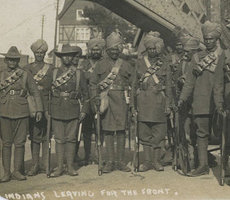 The project aims to foster an increased sense of belonging and shared identity among British Asians – and also to further community relations amongst the communities of South Asian heritage.

It kicks-off in March with two community meetings in central Leicester for around a hundred members of Leicester’s Hindu, Muslim and Sikh communities, on Tuesday 8th March 6-8pm at the Newarke Houses Museum,The Newarke, Leicester LE2 7BY, Garden Gallery A and Saturday 12th March 2-4pm at the New Walk Museum,  53 New Walk, Leicester LE1 7EA. The community meetings will include presentations by historians as well as artists and will also include local community members whose ancestors contributed to WW1. Actual letters from WW1 Indian soldiers will also be shared alongside discussion and refreshments. All attendees with receive a free preview ticket to Wipers, Curve Theatre’s brand new production on Indians in WW1. Please register in order to attend (details below).

For those interested in exploring this unique history further, we will also host a day-long history and arts workshop on Saturday 16th April,  The Newarke, Leicester LE2 7BY, Garden Gallery C.  With materials and presentation from the National Army Museum, participants will engage with original artefacts, letters and photographs from the British Indian army. Following this, they will be guided through the production of original poetry and writings in response to this history which will be shared with the wider public at Curve Theatre to help bring the story of WW1’s Indian soldiers to a wider audience, as related by British Asians today.

“This project tells the story of India’s Hindus, Muslims and Sikhs who fought side-by-side, together with British soldiers, on the battlefields of the First World War. Sharing that history helps us understand South Asia’s long heritage of inter-faith co-operation and comradeship.

“These values are ever more important in today’s Britain. We hope the Unknown and Untold project will provide an opportunity for Leicester’s South Asian communities to lead the way in strengthening relations among each other – and to help understand the long history that everyone shares right across modern Britain”

“We hope and pray that the example of that generation who stood together, fought together, bled together, and many of whom died together, will serve as a constant reminder that, a century on, we must learn to live together and work together in pursuit of peace.”

To secure your place at one of the community meetings, please register here or email Avaes@britishfuture.org with your name, stating whether you’ll be coming to the Tuesday 8th or Saturday 12th event.