Can Keir Starmer help Labour build the bridge it needs?

The world looks very different today, writes Sunder Katwala, to back in January when nominations opened for Labour’s lengthy leadership contest. The party’s new leader, Keir Starmer, is well placed to strike an immediate balance between constructive scrutiny and support for the government during a public health emergency. Starmer also faces the trickier task of introducing himself as Opposition Leader to the general public, having been elected in the midst of a national crisis and hence without the usual fanfare. Iain Duncan Smith faced a similar challenge when elected Tory leader two days after 9/11 – a setback from which he never really recovered.

Politics has changed, with Brexit temporarily disappearing from public view. Starmer has said that he believes the transition period should be extended – but he may be cautious about reintroducing this issue any time soon and re-opening the Remain versus Leave divide. In the longer term, such questions of identity are at the heart of Labour’s post-election inquest, after a doubly traumatic result for many in the party extinguished hopes of governing and the chance of remaining in the European Union. 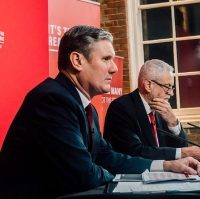 A post-Brexit culture clash broke up the coalition of voters that Labour would have needed to win. Many social democratic parties across western democracies have had similar experiences – though the stark divides in post-Brexit voting behaviour, drawn along generational and geographic lines, hit Labour especially hard in the current electoral system, with the party’s vote becoming more concentrated in the city seats that it already held.

The politics of a “culture war” – between the polarised identity tribes of the liberal left and conservative right – present a dangerous trap for Labour. But for Starmer, defusing a culture war may be more easily said than done, especially if party members fear that this means conceding defeat or selling out on core questions of identity and values by pandering to extreme, nativist opinions. The challenge for all strands of Labour opinion is to find common ground not just within the party, but also with enough of the public outside it too.

Labour’s internal conversation may be too narrow to do this. Often, when the Labour Party talks to itself about polarising issues like immigration, it is a conversation among people who don’t feel conflicted, talking about how they could secure the confidence of others who do. It is an exercise in trying to find the common ground with people who aren’t in the room.

So after this long period of internal argument during the leadership contest, Labour must now face outwards and find practical ways to reduce  the distance between the party membership and the potential Labour voters they are talking about winning back. On immigration, as on other issues, it needs is a broad coalition of left-liberals and left-leaning ‘Balancers’ – those who see both pressures and gains from immigration.

It is noticed less often that “culture war” polarisation can be bad news for the groups that make up the left-liberal tribe. Labour voters in the social groups more likely to sit on the liberal left – graduates, the under-40s, those who live in cities and university towns, and ethnic minorities – would find themselves stuck in a “coalition of the losers” unless Labour can succeed in broadening its appeal, electorally and geographically, to give itself a chance of governing and delivering some of what its core supporters might want.

But the internal party debate becomes more polarised  if it seems to be framed as a question of “values versus electability”, given the party’s divisions and conflicted views about its record in power and opposition under Blair, Brown and Corbyn.

Labour may find more confidence in a bridging agenda if it thinks about this as a question not just of electability, but of the mission and purpose of a centre-left party in polarised times. Labour can struggle to find its voice on identity – because many in the party, who know what they stand for on economics, inequality and public services, fear that engaging with identity issues will prove an unwelcome and divisive distraction.

Yet Labour has a long, somewhat untold, history as a bridging project. The party’s founding mission was about integration – to bring organised Labour into the political system. It succeeded in ways that shaped Britain’s twentieth century at home and abroad, with the cross-class coalitions that built a new welfare settlement. In the post- war era, Labour gave new Commonwealth citizens a stake in society, pioneering anti-discrimination laws and minority voices in parliament that became a cross-party norm. So Labour could see its role as a bridging party in this century not just as a matter of votes but of values too.

It will be some time before politics returns to normal following the COVID-19 crisis. The external context  – social, political and economic – will look very different indeed. Yet at some point our political debate will start to consider those issues that felt so  important before they were overtaken by the current emergency.

There are many approaches to issues like immigration, integration and citizenship that could strengthen confidence across this broad coalition. On these issues Labour needs to speak for an agenda that prioritises fairness to those who come to Britain and to the communities that they join, and which invests in strengthening contact and sustained solidarity across these groups.

To build that bridging agenda, one which resonates in towns and in cities, with younger and older voters and with majorities and minorities in our shared society, the challenge now for Keir Starmer is to find practical ways to make sure that he isn’t only finding common ground inside the party, but beyond it too.

This is an updated extract from ‘The Reset moment: Immigration in the new parliament’ by British Future and the Policy Institute at King’s College London.