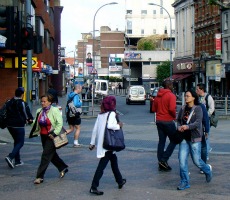 The start of King Street in Hammersmith. Photo: House of Hall

Today’s integration Green Paper is a milestone, writes Jill Rutter. Although the Government has previously published refugee integration plans (in 2000 and 2004), this is the first time that we have a comprehensive integration strategy for the UK. Its publication is welcome, though overdue. Over the last 30 years there have been many advances in creating a country where everyone, irrespective of their background, has a fair chance in life. Yet the EU referendum results showed that divisions still remain.

As a Green Paper, today’s publication is a Government statement of intent rather than a plan with a list of set initiatives. This will undoubtedly frustrate some commentators, as will the lack of identified funds. Rather than shoot the Green Paper down, the task for those of us concerned about integration should be to focus on turning its words into practical action, including advocating for funding where it is needed.

We run an integration network at British Future, which shares good practice and brings local government and civil society organisations together. Together with Hope not hate, we have also visited 60 towns and cities across the UK as part of the National Conversation on Immigration. As part of this journey we have met people and seen projects that really make a difference to integration.

What needs to happen to turn the Green Paper commitments into real integration? We think that there are ten things that need to happen for this to take place.

The Green Paper is a national strategy which will be delivered locally. Integration challenges differ across the UK. Councils are best placed to catalyse integration locally, but at the moment we have a postcode lottery of practice. British Future has recently spent time in Bradford, where the local authority has a strong commitment to integration and a clear vision of what they want a more integrated city to look like. Bradford also has a strong civil society sector and culture of volunteering and self-help. In Southampton, real efforts are being made to integrate new arrivals from Poland. And we have been impressed by the commitment of the West Midlands Mayor Andy Street to tackle hate crime.

Integration has to be an ‘everybody’ issue, or it is not really integration at all. In the past, integration was seen as something that only mattered in the most diverse towns and cities, but took care of itself everywhere else. But it is often mono-ethnic English towns that struggle most to accept new arrivals. In many of these places there is a big gap between public views about the nature of integration and the academic and policy debate. We need to involve the public in a discussion about integration, as we have done in the National Conversation on Immigration.

Integration policy also needs to respond to different types of migration and migrants with different needs. It is good that the Green Paper covers the integration of refugees who often struggle to find work. But is should have given greater consideration to migrants from the EU, a diverse group of over three million people whose needs were largely omitted from the independent Casey Review.

As the Green Paper states, fluency in English is a foundation of integration. But the last census identified nearly 900,000 people who did not speak English well or at all. There is a lack of appropriate provision for those who work long hours and young people who arrive in the UK late in their educational careers. In England, the Government has not made it easy for colleges, with funding regulations, schemes and approaches changing from year-to-year. Regulations in England also prevent most asylum-seekers from enrolling on subsidised English language courses. We could give them the right to study on such courses, while they await a decision on their case, something for which Refugee Action has campaigned.

Overall, we need to raise our game on English language. We need an English language strategy in England that is followed through and promotes greater innovation. For example, we could set up more informal language cafes for those who struggle to attend regular classes. Freeview channels could broadcast lessons, as happens outside the UK.

Those with the least social contact outside their own ethnic and faith group are often those who struggle most to learn English. Social contact matters to migrants and minority communities themselves. It matters for all of us. Our National Conversation on Immigration visits have shown that where people of different backgrounds have positive contact with each other they base their opinions of each other on these social interactions, rather than hearsay or what they read in the media. No child should grow up without getting the chance to meet children from different ethnic, faith and class backgrounds to their own. If the promotion of more faith schools makes that more difficult, then government and schools must work even harder to ensure they provide opportunities for children to mix outside their own group.

One constant theme across the UK is that deprivation is a major barrier everywhere. It is essential that integration policy addresses high levels of unemployment experienced by some migrant groups, particularly refugees. Of course, migrants cannot be favoured over other disadvantaged people and it is important to remember that training should benefit everyone. But the type of work that migrants do also affects their integration. Situations where migrants largely work with other migrants are usually not conducive to integration. Taking action against employment agencies that only recruit abroad is important. Employers need to be included in developing local integration strategies.

The Green Paper looks at how local housing markets can mitigate against social segregation. New housing developments must promote a social mix and provide enough attractive public space for residents to meet up. Architects and planners need much more involvement in integration. But we need to pay more attention to private rental housing too.

Residential mobility impacts on the ability of people to establish local attachments and form friendships with their neighbours. Such mobility is highest in the private rental sector and housing law sustains this. The six month de jure minimum for a shorthold tenancy has become the de facto maximum for many households, forcing them to move home frequently. A longer ‘family’ tenancy would reduce some of the undesirable population churn that is seen in many inner city areas. Councils also need to work with universities and big employers to ensure that some neighbourhoods do not become blighted dormitories for students and migrant workers.

Prospective British citizens have to speak English, pass a citizenship test and attend a ceremony. Last year, nearly 150,000 people did this. But we could improve the citizenship process so it assists integration. It is costly – £14,000 for a family of two adults and two children – and that deters EU nationals in particular. While the Government needs to cover its administrative costs, many people would argue that granting citizenship should not be a money-making venture. Voter registration could be embedded in the citizenship process to encourage political participation. Councils could look at holding citizenship ceremonies in iconic locations, involving longer-settled local residents as a gesture of welcome that brings people together.

While citizenship ceremonies are celebratory, integration also involves confronting some difficult issues, such as those regarding gender roles. The law provides many clear boundaries: those who perpetrate a hate crime or domestic abuse, for example, risk a criminal sentence. But there are also many grey areas and difficult conversations, which professionals such as teachers grapple with on a day-to-day basis. While regressive and prejudiced attitudes may not break the law, where such views are widely held they can provide the ‘oxygen’, in the form of tacit support, for those who hold extreme or violent views. If we do not do this, it is much more likely that situations such as those that arose in Rotherham or Telford will happen. Our National Conversation on Immigration discussions also show that anxieties can be stoked by public perceptions that difficult conversations have not been confronted – for fear of offending Muslim sensibilities, for example. We need to find safe spaces to have difficult conversations in private. We need to help youth workers, teachers, community and faith leaders to develop the skills to have these conversations.

Our National Conversation on Immigration visits have shown how civil society organisations have driven integration forward. In places such as Southampton, London, Newcastle and Aberdeen, civil society organisations have set up language cafes or other informal support to help new arrivals practice their English. In Huddersfield, a Syrian refugee has set up the Buzz Project, a charity to teach beekeeping skills to unemployed people, including refugees. In Blackburn, the Abu Hanifah Foundation’s football club, AHF FC has used sports to bridge faith divides. The list of inspiring civil society organisations is long and many of them use volunteering as a means of bringing diverse groups of people together. These organisations need stable sources of funding. Councils and city mayors can also play a major role in developing volunteering, by providing advice and support to emerging charities and social enterprises.

The Green Paper will generate considerable debate and there will, no doubt, be criticism of its content – for example in its lack of identified funding streams. Some of the comments will be well-founded. As a Green Paper, it is a consultative document and everyone is able to respond to it. But for those of us who believe that integration is important, our priority must be to turn the verbal commitments of the Green Paper into local action.

Jill Rutter is Director of Strategy and Relationships at British Future and author of Moving Up and Getting On: migration and integration in the UK (2015, Policy Press).