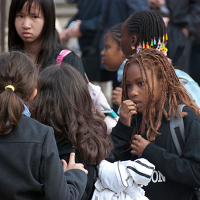 The submission, available to download here, draws on extensive public engagement in 60 towns and cities in the UK over the last 18 months through the National Conversation on Immigration.

Alongside proposals to increase contact in schools, it urges a more creative approach to extending English language learning; ensuring stronger leadership on integration at local and national level; broadening the integration agenda beyond migrants and minorities to make it an ‘everybody’ issue; and efforts to ensure that anti-prejudice strategies are effective in communicating with hard-to-reach audiences.

To promote contact and integration in schools every state faith school, and all state schools in areas of high segregation, should be made to ‘twin’ or ‘link’ with others to ensure pupils mix with children from different backgrounds. ‘Twinning’ could take different forms, with schools deciding the approach that they take. It could involve linking classes; sharing facilities such as playing fields or performing arts spaces; or sharing sixth form teaching. Other options might include bringing pupils from twinned schools together to undertake volunteering through a ‘local citizenship service’ offer.

The  ‘50% rule,’ whereby half of the intake of new, oversubscribed faith schools must come from other faiths or none, should also be extended to all maintained schools, not just new academies.

Jill Rutter, Director of Strategy for British Future and author of the consultation submission, said:

“Schools have mainly been an integration success story in Britain. Most people think that children from different backgrounds mixing in school has done more to improve race relations than anything else in recent years.  But that isn’t always happening and we still see pockets of segregation.

“It’s not right that some children don’t get a chance to meet pupils from a different background. It’s in schools where the government has the best chance of encouraging social contact and promoting better integration. If we’re really committed to getting integration right, schools are where it starts.”

“Our schools are our cradles for nurturing a cohesive and strong society.  But that means they need to equip all of our children with the full picture of all faiths, not just one. The idea of twinning faith schools is bold, practical and crucially could make the world of difference, now and for years to come.”

There is strong evidence of the success of schools linking projects. The Linking Network, which originated in Bradford in 2001, now stretches across England, connecting 18,000 pupils from local schools within Kent, Birmingham, Burnley, Bradford, Newcastle and many other local authorities. A 2011 evaluation by the National Foundation for Educational Research found that “The linking model can have a positive impact on many aspects of pupil’s skills, attitudes, perceptions and behaviours, particularly their respect for others, their self-confidence and their self-efficacy, as well as broadening the social groups with whom they interact.”

“Schools linking is a proven way to help build relationships between children from different backgrounds, developing their skills and breaking down barriers from an early age. Locally-owned programmes, with national backing, promote social mixing in a way that’s sustainable in the long term. The linking model works – expanding it nationally could make a real difference to integration.”

British Future has welcomed the government’s Integrated Communities Strategy green paper, which is an important step towards an integration strategy for England.  Our priorities for practical action to promote integration, set out in detail in the submission to the green paper consultation, include: