Immigration attitudes warming over years, not just months of lockdown

Attitudes to immigration have not undergone the dramatic shift during the COVID-19 pandemic that some might think but have gradually become more positive since the 2016 EU referendum, according to new ICM research for British Future and the Policy Institute at King’s College London.

What has changed is that the public is more aware of migrants’ contribution to public services; and that politicians are starting to catch up with public attitudes in how they talk about migration. We’ve heard a change of tone on so-called ‘low-skilled’ immigration; and there have been policy U-turns on NHS surcharges and leave to remain for the families of health and care staff.

There is a perception that the coronavirus crisis has been a catalyst for transforming views on immigration, particularly in relation to low-skilled workers. A high majority of those surveyed by ICM (70 per cent) agree the pandemic has shown the contribution that immigration makes in staffing essential services, and almost two-thirds (64 per cent) say they now value the role of ‘low-skilled’ migrant workers more.

The new research will be discussed at an event at 12.00 today, hosted by the Policy Institute at King’s College London and British Future. 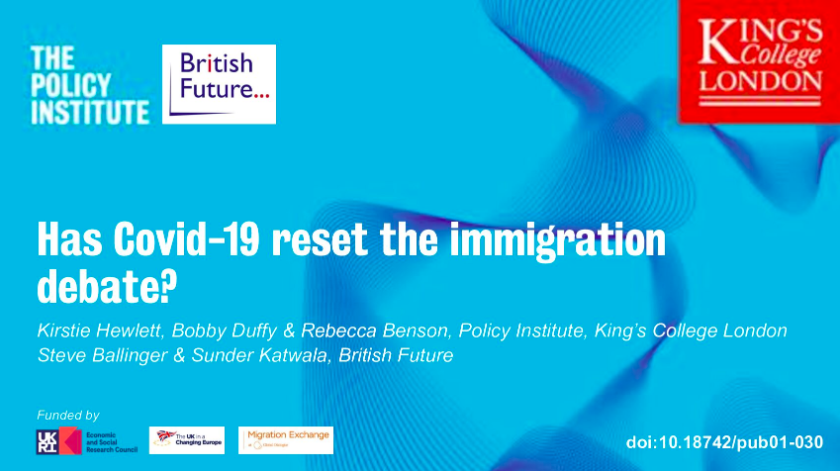 The ICM research tracked opinion on a range of immigration questions, which were first asked in January and then repeated in May to ascertain whether attitudes had moved.

More than three-quarters of people surveyed in both January and in May would give high or medium points to people filling roles needed by the NHS, high-skilled workers and people with experience in sectors with high levels of vacancies.

Support for the number of lower-skilled workers coming from the EU staying at current levels or increasing has risen slightly, from 37 per cent in January to 44 per cent in May. But more (49%) would still prefer numbers to decrease.

Attitudes have remained broadly stable over the last quarter and people care about immigration much less. Even before COVID-19 it had fallen out of the top five issues for voters – now it doesn’t even make the top ten.

The new report contrasts these minor changes to the more significant warming in UK attitudes to immigration that has taken place since 2016. In the last four years the views that immigration enriches cultural life, that migrants have a positive effect on the economy and that migrants make the country a better place to live in have all become majority opinions in the UK, according to data from the European Social Survey.

The new study was produced by the Policy Institute at King’s College London and British Future, with funding from the Economic and Social Research Council through UK in a Changing Europe and Global Dialogue. The pre-COVID survey ran on the ICM omnibus from 10-13 January 2020 with a nationally representative sample of 2,305 adults in Great Britain; the post-lockdown survey ran from 15-17 May 2020 with 2,043 adults in Britain.