Whoever makes it to Number 10 must make a ‘clean break’ from the immigration approach of Theresa May, pursued for a decade as Prime Minister and Home Secretary, if they are to restore public trust on the issue, according to a new report by British Future.

Immigration after May: What should the new Prime Minister change? looks back at Theresa May’s record on immigration and then casts forward to examine what a new Prime Minister could do differently. ICM polling samples public opinion, with voices from politics, civil society and business offering their take on May’s legacy and the prospects of change under a new PM. The report includes recommendations for the new Prime Minister and Home Secretary, as well as advice for opposition parties and civic voices on their role in rebuilding trust.

The new ICM research finds that just 18% of the public – and only a quarter (25%) of 2017 Conservative voters – think Theresa May did a good job of managing immigration as Prime Minister and Home Secretary. 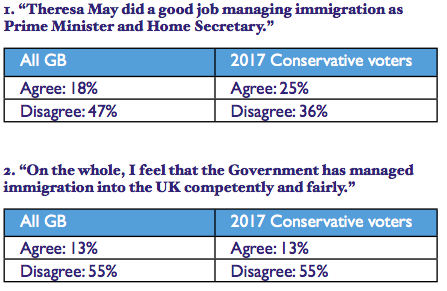 May’s successor has an opportunity to break from her approach and forge a distinctive new agenda – a key objective of which must be rebuilding public trust in the competence of politicians and government to manage immigration competently and fairly.

The new ICM research asked respondents how much they trust different politicians them on the issue of immigration. No politician, of any party, secured a positive rating across the GB public as a whole. Boris Johnson and Jeremy Hunt, candidates to be the next Conservative leader and Prime Minister, had trust ratings of minus 27 and minus 28 respectively – an unwanted inheritance from Mrs May. 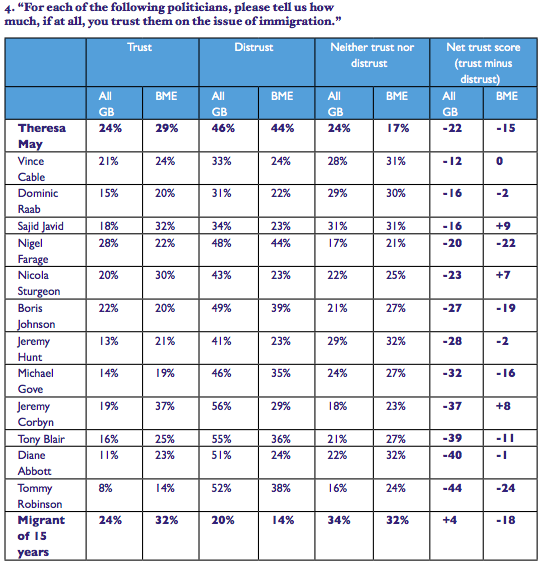 Key to restoring public confidence will be abandoning the Government’s net migration target – described in the report as “a promise it could never realistically hope to keep – which was highly corrosive of public trust”.

There is broad public support for replacing the ‘one size fits all’ target with an approach that sets separate targets for different flows of migration, with ministers held to account for the promises they make. ICM research for the report finds that 60% of the public – and majorities of 2017 Conservatives, Leave and Remain voters – agrees that “The Government should replace the net migration target with separate targets for different types of immigration, like skilled workers and low-skilled workers.”

So the report recommends that the net migration target is replaced by a three-year migration plan, which could include separate targets for different flows of migration, and which is reviewed each year on an annual ‘Migration Day’ in Parliament where ministers are held to account. Public engagement, through a ‘National conversation on immigration’ model, should feed into the Migration Day debate.

Shifting public attitudes on immigration offer an opportunity. The salience of immigration has dropped and attitudes have become warmer and less sceptical.  Most people are balancers, seeing both pressures and gains from immigration. The ICM research finds that most of the public would prefer flows of high-skilled migration, students and seasonal workers to remain the same or to increase, combined with a preference for greater control over lower-skilled migration.

The report also stresses the importance of making immigration work at a local level, managing local pressures by extending the Controlling Migration Fund after 2020.

And it emphasises the need to prioritise integration, ensuring access to affordable English classes and encouraging the uptake of British citizenship. EU citizens in the UK should be offered cost-price or free citizenship if they meet the current requirements. The report further recommends that the new Government abandons plans in the Immigration White Paper for a ‘guest-worker’ scheme of 12-month temporary visas and instead encourages migrants who come to the UK to settle and become part of local communities.