How remembrance can help bring us together

Wearing the Remembrance poppy can help unite Britons from different faiths and ethnicities. That’s a view voiced today by Britain’s most senior Muslim politician, Business Secretary Sajid Javid – and shared by the British people, according to new research by Survation for British Future.

Nearly two-thirds (63%) of ethnic minorities in Britain, including a majority of British Muslims, agree that remembrance brings people from different communities together.

More than half of people from ethnic minorities in Britain say they will wear a poppy this November.

“It is a testament to Britain that so many, no matter what their heritage or ethnic background, are proud to wear a poppy and mark the sacrifice of those who fought so bravely for all our freedoms.

“Highlighting the contributions to the wars by those of various faiths and nationalities reminds us that no matter what your background we can and will stand united for our shared principles.” 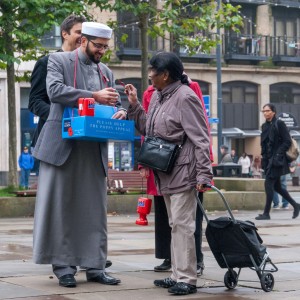 Britain’s commemoration of the First World War centenary, which brought huge crowds to the Tower of London to see its moat filled with over 800,000 ceramic poppies, has prompted an upsurge in interest and knowledge of our nation’s history.

This is a history shared by Britons of all faiths and ethnic backgrounds. 400,000 Muslim soldiers fought for Britain in 1914-18 as part of the 1.5 million-strong army from pre-partition India. Yet this shared history is little-known: research by ICM found that only 22% of people know about this contribution and only 2% are aware of its scale.

A new initiative from British Future launches this month to help promote integration and community cohesion by raising awareness of this shared history, called An unknown and untold story – the Muslim contribution to the First World War.

This evening, it will bring together one hundred trainee British army officers at the Royal Military Academy Sandhurst to hear about the contribution of Muslim soldiers fighting for Britain in the First World War.

On the wall of Sandhurst’s India Room hangs a portrait of Khudadad Khan, the first Muslim soldier to be awarded the Victoria Cross for gallantry. On 31 October 1914,  Khan, a machine-gunner fighting on the Western Front,  held off the enemy long enough for reinforcements to arrive, despite being injured and under heavy fire.

In Birmingham, the project also brings together British Pakistani youth from the Lozells area with white British and British African-Caribbean youth from Kingstanding to learn more of their shared history, including through interviews with the descendants of Muslims soldiers who fought for Britain in the First World War.

Avaes Mohammad from British Future, who is managing the project and will deliver the Sandhurst lecture, said:

“Understanding our past can help shape the present and our shared future. The army that fought for Britain in 1914-18 looked surprisingly like the Britain of 2015, with soldiers from across the commonwealth fighting alongside white British troops.

It’s an unknown and untold story, and an important one – a shared history that helps show that we’ve all got more common ground than we think.”