We need a plan from the Home Secretary, not just a speech

According to media reports, she will go on to say that the net economic benefits of immigration are close to zero, and that “there is no case, in the national interest, for immigration of the scale we have experienced over the last decade.” 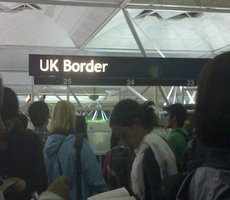 Such a stinging critique of the Home Secretary’s record on immigration might be understandable from her shadow in the Opposition, hoping to get into power so she can do something about the issue.

But Theresa May is not Shadow Home Secretary. Managing immigration is her job, and has been for the past five years.

Instead of a conference speech setting out how bad things are, the Home Secretary should be setting out a plan for how she will do something about it – particularly if she is serious about getting immigration down to her ‘tens of thousands’ target.

To date we have seen no such plan.

Most people think that immigration brings both pressures and benefits. Higher population means pressure on housing, public services and jobs. But it also brings the skilled workers that have made our economy one of the strongest in Europe; the nurses, doctors and carers on which many Britons depend; and international students that bring £9bn into the economy each year and make our universities some of the world’s best.

Public trust in the government’s ability to handle immigration is low and today’s speech will not help. Immigration looks set to remain relatively high for the near future; when the Home Secretary tells people that this isn’t compatible with a cohesive society, it will worry them yet further.

In stating that the net economic gains of immigration are zero, the Home Secretary appears to accept that the costs and gains roughly even each other out – so her concern is primarily for the cultural impacts of immigration and the rapid changes it can bring to communities.

In areas where the pace of change has been fastest, we need a plan to manage that. Immigration will only work for Britain when integration works too. And when it does, most Britons are pretty fair-minded: when migrants come to Britain and learn English, get a job and pay taxes and become part of the community, they will give them a fair crack of the whip – a chance for them and their children to become one of us.

As Prime Minister David Cameron said this morning to the BBC, in Britain “We’ve built one of the most successful multi-racial multi-ethnic democracies anywhere on earth”.

Britain also has a proud tradition of protecting refugees, dating back to the first world war and well beyond. The humanitarian public response to the Syrian refugee crisis showed that support for this still remains, and it is important that the Home Secretary will make a clear distinction in her speech between economic migration and protecting those who need a place of refuge.

But instead of a speech focused on the problems, Theresa May should today set out her plan to make things work. In August, British Future and the Institute of Directors called for a “Comprehensive Immigration Review” – one which engages the Government’s panel of independent experts, the Migration Advisory Committee (MAC), to conduct a full review of the policy options available and the impacts that such policies would have on the economy, society and Britain’s international responsibilities.

Specifically, the Home Secretary and PM should request that the MAC:

-Advises the government on the policy options that could enable annual net migration to fall to the government’s target of ‘tens of thousands’, during this Parliament and/or the next.

-Sets out the best available evidence on the potential economic, social and cultural gains and risks of pursuing these policy options; as well as their compatibility with the United Kingdom’s international commitments and obligations.

-Engages the full range of interested stakeholders and the public themselves to ensure that their views, about the potential benefits and costs of different policy options, inform decisions about which choices to pursue.

This should be welcomed by all serious voices from every side of the immigration debate. David Cameron’s government was elected on the importance of setting out a credible long-term plan and delivering it. Conservative MPs will want to ensure it pursues a migration policy that sets sensible and achievable limits to migration in a way that is consistent with the economic recovery.

Setting out a credible roadmap – one that lets business, other stakeholders and the public know where they stand – could help to establish how we actually want to resolve the trade-offs and choices that face not just the Home Secretary but the British public too.