Could football be coming home? 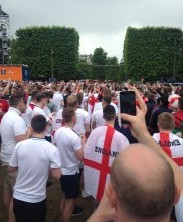 So the morning of the crucial game had arrived, writes British Future’s Mike Hough  from the Euro 2016 Fanzone in Paris. With both 3 points and local bragging rights up for grabs, there was no doubt that both sets of players would be highly motivated to win the game. It was also a major opportunity to seize a place in the last 16!

After waking up early, we set off with plenty of time to spare, eager to make sure we arrived in time for the game. After passim through all the security checks, we headed into the fanzone, both nervous and excited.The build up had been dominated by talk of off-field trouble and potential skirmishes, but fortunately there was none of that in the fanzone in Paris. Both sets of fans mingled together well. There was plenty of banter on both sides but nothing over the top – here it was only the football that really mattered!

After a loud rendition of God Save The Queen, England and Wales were ready to begin. Despite 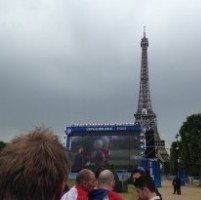 some criticism of the team from the first game, Roy Hodgson opted for the same starting line up. Now, all the questions and talk would be answered.

England nearly drew first blood when Sterling went close, but the first half saw very few clear-cut chances. It was Wales who took their opportunity, with a long-range free kick from Gareth Bale beating England keeper Joe Hart. The Wales fans were sent into delirium!

This gave the England fans plenty to ponder at half time. The introduction of Vardy and Sturridge gave new impetus to England. Vardy equalised but the game appeared to be petering out – until a 90th minute Sturridge winner from a scramble!  There was joy and pandemonium in the crowd as the England fans celebrated the winner. 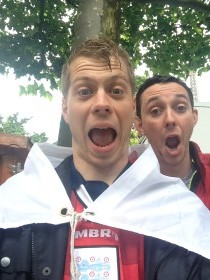 Despite the obvious differences in mood, there was a high level of respect between the two sets of fans as the game ended. For the England fans there was relief and ecstasy but for Wales a lot of pride. As we all walked away from the fanzone, we asked ourselves: had the luck just turned? Could this be our year?

Regardless, the team will continue to rely on the support of the fans. And, as the scenes highlighted yesterday, when we all come together and show that #WeAreAllEngland,  great things can happen.Football might just be coming home!