English identity has become a much more inclusive and welcoming identity, but different attitudes towards Europe now form one of the major differences between English and Scottish nationalism, said Conservative MP John Redwood at today’s Englishness festival. 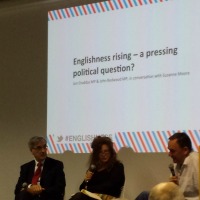 “Scottish nationalism is about getting out of the United Kingdom. English nationalism is about getting out of the European Union,” said Redwood. “A lot of the English feel they can rub along within the United Kingdom, and make some changes within it, but find it harder to rub along within the European Union,” he added, suggesting that a significant renegotiation of the relationship, at least, followed by an in/out referendum, could bring a lot of people together.

“The Scottish so-called Nationalists are not nationalists at all,” said Redwood, noting not just the SNP’s pro-Europeanism but also wanting to have a currency run by the Bank of England. “If you don’t run your own currency, then you’re not a nationalist,” said Redwood.

Jon Cruddas signalled that his personal commitment to a referendum on EU membership remained in place, despite that not being party policy.

“I used to think before I was a member of the shadow cabinet that an EU referendum was an entirely correct response,” said Cruddas, while noting that he accepted as a matter of “collective responsibility” that it wasn’t time to make the decision “until the shake-up in the Eurozone.” This might take a rather long time, Redwood suggested.

Cruddas contrasted his “caution” about the European project with the strength of Redwood’s views on Europe, though he cited his own credentials in founding a Labour against the Euro group as showing there was some common ground.

“I don’t see with English nationalism that there is a necessary read across to an anti-European agenda,” he said, while arguing that he would favour a pro-European ‘reform’ agenda in the national interest. He also said that he had changed his mind about Englishness and its ability to expand the definition of who is English.

“I used to think that Britishness was the friendly, welcoming identity that we use to invite people into our country into, while Englishness was more exclusive. As I’ve thought about it more, I’ve realised that this is completely wrong.”

“If you think back, before Britain, to Shakespeare’s England, then one of its great strengths was that it invited in people from all over the world when they needed a friendly place which offered them more freedom than tyranny elsewhere,” said Redwood. “Shakespeare is teeming with identity issues. I want to be part of the modern England, best represented by London today. I am not part of the negative idea of England, who want it to be exclusive and who want to bring back the 1950s.”

“One of the exciting things about England is how we have often led change and invention.”

“Look at how much we have benefitted from the waves of immigration” over many centuries, said Redwood.

“I think Englishness is for everyone who settles here and feels English,” he added.

Cruddas said that the speed of change in Barking had brought about anxiety about identity, and the rise of the far right, but had ended with an inclusive Englishness, including a shared sense of the value of St George’s Day.

He felt the left had in the past seen identity as “pathological or racially exclusive” but he thinks that is weakening:

“For me, Englishness is inclusive. If Labour stands outside of that, it loses the pulse of the country.”

Cruddas argued that the Labour party had only won elections convincingly when it had “contested the national story” – in 1945, 1964 and 1997. “Rather than speaking to sectional interests, it has to have a unifying narrative for the whole nation.”

Redwood said that, in England, he felt that left and right could unite around St George’s Day as a holiday, as it could be a good compromise between the left championing May Day and the right wanting Trafalgar Day.

Suzanne Moore, chairing the conversation, said that she herself “always feel most profoundly English when I am in America, when I am away,” citing a sense of “melancholia”.

Redwood chose a cricket ball as his object to express his Englishness, while Cruddas selected George Lansbury’s 1935 book My England. Moore selected PJ Harvey’s album Let England Shake. “I don’t think any country but England could have produced PJ Harvey or Dizzee Rascal’s Bonkers. Its a very English word, bonkers,” she said.