Migrant footballers score 80% of goals at the World Cup

Migrant footballers have scored 80% of the goals at the 2014 World Cup, showing how important skilled migration is in the global game of international football.

123 goals have been scored by players who live, work and play outside the country that they are representing in Brazil, while home-based players have netted just 26 times. (There have also been 5 own goals scored, making the total of 154 goals scored so far).

All eighteen goals in the knock-out round which concluded on Tuesday were scored by players who live and work abroad (though one of these was an own goal, which has not been counted in the migrant goals total).

England might not have made it past the group stages, but players based in England have nevertheless scored one in five of the World Cup goals, placing our Premier League ahead of Germany and Spain in the World Cup goals table. And this success reflects a broader theme; migrant footballers are a World Cup winning formula. 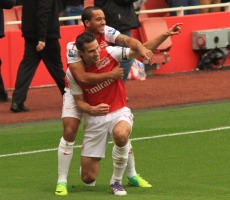 Van Persie, who plays for Manchester United, has scored three goals so far for his national team of Holland. Photo: Ronnie Macdonald via flickr

As British Future’s analysis has shown, the World Cup is a migrant-majority tournament. Of the 184 players who have made it to the last eight, 128 are footballing migrants who live, work and play outside the country they are representing in Brazil, while just 56 play in their home countries. Germany is the only country to make it this far with a team of mostly home-based players.

Those that play for England’s Premier League have been instrumental in World Cup success. Thirty-two World Cup goals have been scored by players for English clubs, making up 20% of the total goals scored, and almost a quarter of the players in the World Cup last eight play for English clubs. Bundesliga players have scored  30 goals (19%), with the Spanish league on 22 (9%), Serie A in Italy on 14 (9%) and the French league on 12 (8%).

As these figures suggest, the English Premier League is the central hub of the international game and immigration is clearly a key part of success on the pitch.

“Global football today is based on skilled migration and this tournament is showing just how much of the world’s footballing talent is based in the English Premier League,” says Sunder Katwala, director of British Future.

“It seems almost certain that a migrant will win the Golden Boot,” he adds. “With the exception of Germany’s Thomas Muller, it is quite rare to see a top World Cup striker who plays in his home country.”

Of course this won’t provide much comfort to those who had their hopes pinned on a victory – or at least a decent run – for Roy Hodgson’s England side. So what lessons can we learn to ensure greater success for the 2018 World Cup in terms of England, not just our Premier League? Countries with more players who play abroad have been more likely to progress, reflecting the importance of skilled migration in football today.

“It it could help the competitiveness of the English team if at least a few of the young stars emerging in Roy Hodgson’s team were to get some experience playing in Germany, Italy or Spain ahead of the 2018 and 2022 tournaments,” says Katwala.

In short, our homegrown players better start packing their bags – and we don’t just mean to visit Russia and Qatar for their World Cups. In the meantime though, England will always have the Premier League – which could claim to be (sort of) winning the World Cup.