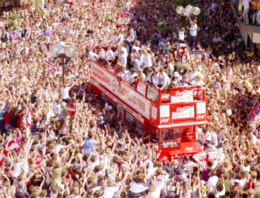 England depart the World Cup, writes Sunder Katwala, once again without reaching the big stage of the final. But this time it felt rather different.

We did not enter this tournament expecting to win. Four weeks ago, few England fans expected this World Cup to feature an England team narrowly losing in the semi-finals.

This summer changed how we think about England. Not just our football team, who should surely be welcomed home with a bus-top parade where fans can show our appreciation for this group of young men who played with such pride and let us fall in love with our national game once more.

It also changed how we think of England as a nation – an imagined community of millions where we share something with people we do not know. Yes, it is ‘just sport’ and it cannot do all the heavy lifting required to heal all our divisions.  We must now take the conversation started this summer, about an inclusive Englishness that we can all share, out of the stadium. Politicians should step up. But sport can do things that nothing else can. It brought people together, in shared moments of passion, pride, joy and, ultimately, disappointment. There are so few other things that 30 million of us all do together at the same time.

It is these shared experiences – of loss and, somewhat less often, of victory – that create shared memories and stories about who we are, where we have come from and where we might try to go together.

Manager Gareth Southgate spoke about why football is more than a game. He would, of course, be judged primarily on football results. But he was comfortable to volunteer that his team could do something more important than that – and help to define the sense of identity that modern England has been missing.

The England team has been a shared symbol for a national tribe of 35 million+ who watched them play last night, a group that clearly spans our divisions about politics, whether Tory or Labour, Leave or Remain, and which encompasses all of England, across ethnicities and faiths, generations and social classes. It is an England team which reflects the everyday diversity of twenty-something England, yet which belongs equally to our big cities and shire towns.

Our flags have now been taken down from balconies and cars. Waistcoats returned to the back of the wardrobe.

But we should not lose sight of the important lessons from this summer, which go beyond sport.

The reason that it was left to Gareth Southgate to speak for England is because we have so few symbols for the English to embrace.  We liked the England that we saw this footballing summer – one which includes; one which shows how England has changed and yet remained England all the same;  one which any primary school child in the nation can see that they are invited to belong.

We do not need to wait four years, or even two, for sport to unite us again. We should put out at least as many flags when the Lionesses play next summer, as well as when the men’s team might get to compete for the European Championship at Wembley in 2020.

But England cannot leave the debate about our national identity to sport alone. We all want to see this story of the youth and talent of a diverse England turn into one of potential that can be unlocked and fulfilled. It is an attractive metaphor for our society too – but sport cannot do the heavy lifting to make that story of shared belonging and equal opportunity a reality.

A cautionary tale comes from across the channel in France, who continue their run this year to Sunday’s final. Their World Cup victory in 1998 offered France’s polarised society a vision of a multi-ethnic nation of which they could all feel proud. Yet without the spadework required to close the gap between that vision and the lived reality of opportunity and identity in France, it now feels like ancient history and an opportunity missed.

England should not make that same mistake. Football has helped to define the positive vision, of an England we would like to build and share. We must now take it out of the stadium to make it a year-round reality – an inclusive England to which football comes home.