England won 6-0 in Bulgaria to all but secure their qualification for the finals of Euro 2020.  But the old joke that Bulgaria were lucky to get nil has rarely been more apt, writes Sunder Katwala. 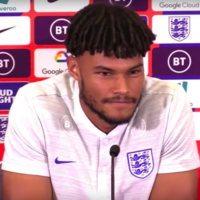 What a proud night it should have been for Tyrone Mings, playing his first full international for England. Yet he found himself having to appeal to the match officials about monkey chanting and the first question in his post-match interview, on the biggest day of his football career, was about dealing with racism.

“It was a great occasion – I made my England debut, slightly overshadowed by some very disappointing chants. We showed a great response – and let the football do the talking,” Mings told ITV after the game.

Hearing England’s away supporters chanting against the racism of the Bulgarian supporters was a sign of the progress we have made over the years – as well as its limits in 2019. Some fans stayed behind in the stadium after the game to sing a chorus of “Who put the ball in the racists net?” – a chant in honour of Raheem Sterling.

The first generation of black England players in the late 1970s and early 1980s could not even be sure of their own support. There was National-Front-inspired chanting at away games, trying to sing the wrong scores on the principle that black goals didn’t count.  The late Cyrille Regis told of how his selection to play for England led to his receiving a bullet through the post.

But today’s players have every right to not have to re-live that history and to expect better.  In 2019, there is nothing unusual about a black English footballer. Tyrone Mings is among a dozen black players to make their international debut under England manager Gareth Southgate. Indeed, since Viv Anderson became the first black player to become an England full international in 1978, around one in four new debutants for England have been black or mixed race.

Our sporting teams reflect the nation that we have now become – about a quarter of those aged under 30 are ethnic minorities too.  Our footballers and cricketers have probably done more than any politician to change attitudes about Englishness. Nine out of ten of us now feel it is not necessary to be white to be English – and who we see wearing three lions on their shirt has played an important part in that shift.

There is certainly still racism to be rooted out of English football, but that progress across the generations needs to be both deepened here and emulated across the continent too. England’s players should expect football authorities to ensure that they don’t face racist abuse when representing their country.

The weakness of UEFA’s sanctions against racism have been rightly criticised. Bulgaria had to close part of the stadium last night because of racism at previous games. Clearly, the banners about tolerance and fair play draped over the empty stands failed to get the message across.

So last night’s game offered a test case for UEFA’s protocols for dealing with widespread racism at big matches. After monkey chanting and Nazi salutes from a significant number of supporters, a public announcement was made about the racism – including that the game would be stopped if it continued. The protocol is that the message is repeated – and then that the referee should abandon the game. After some expulsions from the ground, the game did stagger on, with a reduced volume of racist abuse, and the match officials recognising England’s desire to complete their victory on the pitch.

Bulgaria’s racists were organised and pre-meditated. They did not just make Nazi salutes. They had printed T-shirts saying “UEFA: No Respect” to mock the calls to kick racism out of the game. Yet this all came as a surprise to the Bulgarian FA President. He offered a mix of complacency, denial and straightforward trolling in response to England’s concerns about racism – arguing it was “derogatory” and “unfair” to suggest there had been any recent problems or cause for concern.

Unfortunately, too many Bulgaria supporters showed why England’s worries were well-founded. It is sad to see the decline of Bulgaria, on the pitch and off it, particularly for fans of a particular vintage who remember the great 1990s teams led by Hristo Stoichkov, and their dramatic defeat of Germany in the 1994 World Cup. But their reputation will be dominated by racism – not football – until action is taken.

UEFA’s investigation into the racism at last night’s game should lead to a yellow card for Bulgaria, putting the country on notice that their continued participation in this tournament, or qualifying for the next World Cup, will depend on a clear plan to root out racism. UEFA could make clear that they do expect, as a first step, the resignation of the Bulgarian FA President to make way for new leadership that is not in denial that there is a problem to be addressed.

Yet the last word should go to England debutant Tyrone Mings. “I don’t think anything could spoil this moment for me personally, ”he said after the game.