Increasing vocational opportunities for young people at school was the highest priority for attendees at  a debate called Stephen Lawrence: 20 Years On event, writes Richard Miranda.

The debate, held in Eltham, asked people in the audience to consider what the biggest issues were in Eltham and wider British society, covering racism, crime and education, among other issues. Narrowing the skills gap between education and employment through a focus on developing vocational skills won the vote as the issue that was more important to change than any other changes discussed. 52% of those who voted at the debate saw teaching more vocational skills in schools as the highest priority, compared to 31% who wanted more community spaces and 17% who thought the main priority should be ensuring that police were more representative of their communities. 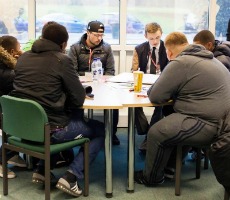 Citizen jury workshop in Eltham, one part of the Stephen Lawrence: 20 Years On event

To mark the 20th anniversary of Stephen’s death, British Future held a debate in Eltham to get a local perspective on how it has changed since the shocking event took place and the challenges the local community faces today. A panel including Conservative MP Gavin Barwell, Labour MP David Lammy and public attitudes specialist Deborah Mattinson, and the audience, considered proposals from panels of local residents about policies that needed to change.

Many participants felt that race relations were not a particularly contentious issue for an area that previously had been stereotyped as being divided by them. Some local Eltham attendees contested that this had never been the case but one largely caricatured and perpetuated by the media, which had stigmatised Eltham as a result. Among those who participated in the workshop the previous day and the debate itself, the discussion around community relations centred more on whether local people felt ownership of their area and shared spaces than problems of race, as well as the role of the police.

Workshop partcipants consisted of local residents who were either currently 18 years old and 38 year olds, the age Stephen Lawrence was when he died, and the age he would have been today. This was to ensure a broad perspective was captured of what had improved over the last 20 years and what still needed work in present-day Eltham. After a long day of lively discussion, workshop participants came up with a series of very specific recommendations to discuss at the debate around issues that related very closely to the Stephen Lawrence case, around education, policing and community/race relations.

One of the 18-year-old Eltham residents who participated in the previous day’s workshop said “[Developing vocational skills] is most important. I can’t even get a Saturday job. Online applications ask me ‘what is my biggest achievement’ and I don’t even know where to begin.” This echoed a larger sentiment that education in Eltham and beyond was not preparing its students with the practical skills needed to succeed in the modern workplace, such as networking, leadership and self-confidence. Although all three issues were thought to be important, when forced to choose having a more vocational education that better prepares students to become employed was the major concern for attendees.

Strikingly, for all the concern there was a general consensus among those present that there had been huge turnaround around for schools in an area that had once struggled hugely with attainment. It was felt that the main worries of Eltham mirror the worries of London and Britain at large, and are focused on education and community, rather than policing and race relations, does seem to show that although Britain is still grappling with vast challenges, we have made considerable strides in the 20 years following Stephen’s death.

Richard Miranda is a freelance journalist living in London.

Check out images from the event below: