Most people believe that far right groups like the English Defence League stir up hatred and violence in Britain in a way which increases the risk of future terrorist incidents. A rising proportion of Britons say they would never join the EDL – a view held by 84% of people who have heard of the group – according to new polling released this weekend. 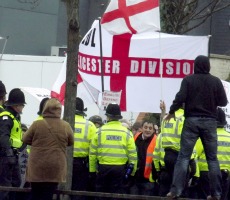 After the brutal murder of a soldier in Woolwich by Islamist extremists, new polling published this weekend shows a clear public rejection of effort by one extreme fringe to capitalise on the activities of another, instead capturing growing opposition to the far right. Most of the public want the media to be more wary of giving either extremist group a media platform to spread hateful views.

According to a new Survation poll, published in the Mail on Sunday, 61% agree that “organisations like the English Defence League are stirring up hatred and violence between groups and making the risk of attacks of this kind more likely.” Only 14% disagree.

The public believe it is important for the media to show graphic footage of important news events like the Woolwich murder, but most people say that neither extreme Islamists like Anjem Choudary nor extreme anti-Muslim groups like the EDL should gain a platform to spread their views on major TV news programmes.

In a separate YouGov poll, 84% of Britons who have heard of the EDL say they would never join the group. This is a 7-point increase from November 2012, when 77% said they would never join the group. Six percent say they would consider joining, a fall from 9% last Autumn. This poll appears to demonstrate that this week’s spike in online support in social media spaces like Facebook for the EDL is coming from a tiny (and indeed dwindling) minority fringe, and certainly is not an expression of the public’s view generally. The number who have heard of the group has risen, from 33% to 42% since last Autumn, but this would seem to be increased awareness of a toxic brand.

Even in the immediate aftermath of the Woolwich murder, there is broad confidence in the security services. Only 12% say the security services are handling the threat of terrorist attacks badly, and 64% say they are doing so well in the Survation poll. Fifty-five percent have a favourable view of the police handling of the Woolwich incident, while 15% have an unfavourable view.

Meanwhile, 64% of people in the Survation poll say that soldiers should continue to wear their uniforms in public, while 25% say they should not because it makes them a target.

Fifty-two percent of people say that the media were right to show graphic footage of the attack “as there is a strong public interest in knowing what happened,” while 36% felt this risked glorifying the attackers “and helping them to spread their message of terror.”

Sixty-five percent of those expressing an opinion tell Survation that extreme Islamists should not get major media platforms, while 56% of those with a view say the same about groups like the EDL.

Clearly, these are complex issues, since media organisations have to strike some difficult balances between reporting and scrutinising these views, and giving more credence and profile to extreme fringe voices than they legitimately merit. These poll results do not necessarily indicate a public appetite for a blanket ban, which could also be counter-productive. Covering extremist Islamist groups and far right groups in reported packages rather than prime-time studio interviews might well be an effective way to report and scrutinise extremist activities.

Fifty-one percent of the sample held a negative view of such events in general, with 20% in favour and 22% neither positive or negative. The negativity rose to 60% when the EDL and BNP were specified as organisers, with 17% being positive about such events. This result suggests that the public’s instinct was that events opposing “Muslim terror” would likely be held by hot-heads and extremists, even without the organisers being specified. The poll did not ask about peaceful demonstrations against all forms of terrorism and extremism, for which previous research suggests there would be a strong appetite.

The dangers of conflict and violence

YouGov’s polling also asked people a number of questions about relations between groups and the risks of conflict between groups.

The YouGov/Sunday Times poll shows that 14% fear that “a large proportion of Muslims feel no loyalty to this country and are prepared to condone, or even carry out acts of terrorism.” That minority view is rejected by eight out of 10 people. Sixty percent say that “the great majority are peaceful and law-abiding” alongside “a dangerous minority” who condone terrorism, while another 20% believe that “practically all British Muslims are peaceful and law-abiding” and so are as likely to deplore the terrorism as everybody else.

The polling reported in the Observer digs further into attitudes towards extremism and conflict. While the results of any poll carried out in the immediate aftermath of a major news event should be treated cautiously, since it would not be clear whether the reactions will be a temporary spike or sustained, there is little evidence that the Woolwich attack itself has changed attitudes. Leading academic Matthew Goodwin, writing in The Observer, notes that the findings are broadly very similar to those revealed in a similar poll in November 2012.

Both polls capture ambivalence about community relations and the place of British Muslims in British society in particular. Sixty-three percent of people say that the “vast majority of Muslims are good British citizens,” with 12% disagreeing, yet at the same time, 48% oppose the statement that “Muslims are compatible with the British way of life,” with 24% supporting this idea.

The dissonance and apparent contradiction between these two contrasting answers might best be explained by people having a different intuition between British Muslims, as individual people, and fear of Muslims as a group. One of the most important ways to bridge such a gap would be by promoting contact between people from different backgrounds, so that fear of the unknown can be mitigated and overcome.

While the majority are good citizens is the view of 65-68% of Conservative and Labour voters, and 80% of Liberal Democrats, Ukip supporters favour the proposition by a much narrower margin, 39% to 28%.

The conspiracy theory that “Muslims are part of an international plot to abolish Parliament” is rejected by the public, but it does have 17% support, with 53% opposed. While clear majorities of the big three parties reject this, a narrow plurality of Ukip supporters endorse this conspiracy theory, by 37% to 27%, with 28% neither agreeing nor disagreeing.

Ukip leader Nigel Farage has joined other mainstream party leaders in calling for calm across all communities, in sharp contrast to extreme fringe reactions from the BNP and Ukip. These findings suggest that, if he wished to do so, he could be an important voice if he were to actively seek to challenge this view among his supporters, at the same time as seeking to articulate ways to promote integration more effectively across communities. But these findings could also explain why grassroot Ukip advocacy can often be less measured than that expressed by its leadership.

The importance of addressing these issues can be seen in responses to the question “violence may be needed to protect my group from threats.” Eighteen percent of people agree with this proposition, with 50% rejecting it. Supporters of the traditional parties are clear in their rejection of violence, Conservatives by 49% to 20%, Labour supporters by 55% to 17% and Liberal Democrats by 71% to 8%, but the responses of Ukip supporters show ambivalence on this question, with 32% prepared to consider the prospect of violence, 29% opposing this and 32% neither agreeing nor disagreeing.

However, Ukip supporters do strongly endorse the proposition “Personally, I would never engage in violence to achieve my goals” by 71% to 7%, and on this question their responses are similar to those of the public generally, where this is rejected by 78% to 5%.

Gaps in the evidence and reporting

One important missing issue from the immediate polling from various sources is detailed information on British Muslim attitudes. Previous research suggests there would be a lot of common ground, but polling methods mean this information is not available to news reporting.

Reporting on the views of minority groups is more expensive and time-consuming. However, there is a good case for arguing that the efforts of media and polling organisations, as well as public and civic bodies interested in these issues, would be well directed towards looking at ways to do that. For example, attempting to pool resources across media or civic groups to make robust polling on Muslim and non-Muslim attitudes possible would give us more new information than a large number of further general polls covering similar territory.

Better coverage of Muslim as well as non-Muslim attitudes to these issues is necessary if the public and media discussion about effective responses to the threat from extremism is to be a fully informed one.