A decade after 7/7, where is the Muslim integration debate headed?

Ten years on from the terrorist attacks in London, questions about the radicalisation of young British Muslims have been raised again after stories emerged of British citizens travelling to Syria and Iraq to join the so-called Islamic State (IS) group in 2014.

Our State of the Nation 2015 report found that most people (58%) agree that most British Muslims oppose the extremism and violence of IS, while 13% disagree.

That finding can perhaps be taken as a measure of ‘glass half-full’ reassurance – an indicator of a bedrock resilience in British attitudes towards the multi-faith and multi-ethnic society that we have become.

It is, however, a cautious welcome. Only a quarter of respondents ‘strongly agree’ with the statement, so this is something with which many people ‘tend to agree’. And the bar here is set fairly low: whether people think that most of the nearly 3 million Muslims in Britain oppose a group as extreme as IS.

Perhaps some respondents may reasonably feel that they do not have sufficient personal knowledge or information to offer any clear view on what most British Muslims think. However, active disagreement with the statement suggests, at best, a highly sceptical take on the views of British Muslim fellow citizens.

The 13% who disagree are fairly evenly distributed across society. The only significant differentiator is politics: particularly views of immigration, Europe and tendency to support UKIP. 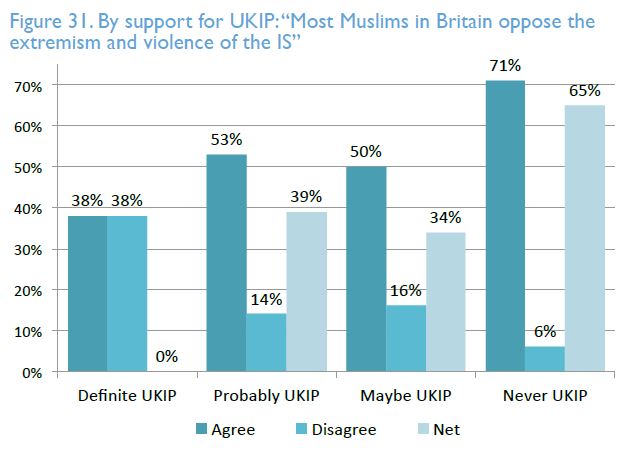 On balance UKIP voters do agree that most British Muslims oppose ISIS. But they are twice as likely to disagree with the statement compared to most Britons. What really makes a difference is the strength of identification with UKIP: there is a significant difference between the most committed 10% of the UKIP vote and others who are just considering UKIP, whose views are much closer to those of the other parties’ supporters.

Similarly, attitudes towards the EU are a strong predictor of scepticism towards Muslims, but it is only the ‘definite out’ group which is distinctive, while the ‘leaning out’ group resembles median public attitudes.

A couple of conclusions might be drawn from this.

Firstly, this helps to exemplify why campaigns against Islam are unlikely to form any significant part of the national party campaigns in 2015. The form which even populist politics takes in Britain is distinct, on this issue, from several other European countries, including the Netherlands, Denmark and France, where politicians have made issues such as Halal meat a significant focus of political campaigns. Seeking to emulate this in Britain would have limited impact. One would struggle, for example, to imagine the recent anti-Islam Pegida marches in Germany that have drawn crowds of up to 25,000, being replicated here in the UK. Hope Not Hate’s research reports that far right groups like the EDL and the BNP are at their weakest for two decades. There are certainly important public concerns about integration, but explicitly anti-Muslim campaigning could well be both contentious and unpopular.

The State of the Nation findings show why the idea of a “fifth column” in British society – the use of which term had Nigel Farage branded as “irresponsible” by Home Secretary Theresa May – will have resonated with UKIP’s strongest supporters, but also why it would not be in UKIP’s interests to stoke-up issues of Muslim integration. Beyond principled objections about the risks of doing so, it is also clear that this would be more likely to narrow the party’s appeal than to extend it.

Farage also wrote about his commitment to “actively support and rally behind the people who are leading the charge against radical Islam, especially those in Britain’s Muslim communities”. But civic Muslim voices involved in anti-extremism work felt his language risked making that work harder.

Dilwar Hussain, of the New Horizons in British Islam group, said: “Nobody should be in denial about the real challenges we face, but using language like ‘fifth column’ overheats and polarizes the debate in an unhelpful way. It is bound to spark headlines which can be seized upon and twisted by those seeking to spread a ‘them and us’ agenda of grievance and radicalization among young vulnerable men.”

The State of the Nation findings suggest that UKIP may be one of the few institutions or voices trusted by the hard-to-reach groups that are very sceptical of Muslims, including those who hold prejudiced views against Muslims.

In the heat of an election campaign, some may exacerbate and stoke up prejudices, but UKIP candidates could also take an intelligent risk by deliberately confronting prejudiced views.

Candidates from any party that sincerely wants to promote integration would further this cause by taking a strong stance against prejudice.