Question and debate the veil, don’t rush to ban it

As a practising Muslim I don’t believe that covering a woman’s face is something that Islam requires of her. I also don’t believe it’s fair to say that people who find the face veil threatening or intimidating are simply being racist or Islamophobic, writes Rabiha Hannan.

I don’t even believe that covering the face is particularly conducive to the country we live in. But then neither is the idea of banning it. 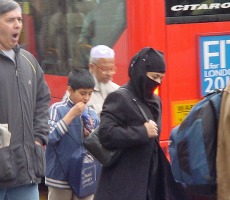 The wearing of the veil has been under scrutiny recently. Photo: Scott Smith

Through my research into the Qur’an and the teachings of the Prophet Muhammad, I can’t find anything that encourages women to cover their faces. In fact the face covering for women clearly pre-dates Islam: you can trace it back to Assyrian law as well as the Byzantine era. It was also practised amongst the Greeks and prevalent amongst the Arabs before the arrival of Islam.

But a tiny minority of the British Muslim population feel otherwise. For them the choice is a very personal one, an expression of their spirituality, one that helps them to be better people. These are not women that have just got off a plane from Saudi Arabia or Afghanistan. They are often British-born, well educated, confident, articulate, peace-loving women, who don’t want to be told how to dress. And nor should they be.

Indeed one of the strengths of this beautiful nation is that we allow people to choose who they want to be. We have a sense of respect for different cultures and religions. We recognise that diversity and difference is not a weakness, but something that enriches us as a nation and gives us strength.

We don’t have a tradition in the UK of dealing with these sorts of issues by law, unlike countries like France that have debated them over the last decade. I believe ours is the right approach. In fact measures like banning the veil from educational establishments, far from stopping people, further draws them to the cause by turning the personal choice of a small minority into an issue of rights and infringement of personal and religious freedom.

That said, in a country where people are used to seeing each other’s faces and assessing a person’s thoughts and ideas through facial expression, covering one’s face will certainly seem strange or foreign. However, when it is accompanied by the backdrop of negativity that Islam and Muslims have received for a number of years now – seen as a religion of terrorism or oppressive towards women – the niqab (face covering/veil) simply further plays into that stereotype.

So it comes as no surprise then that some people look at it and feel threatened or intimidated, or even find the covering of the face something sinister. These are genuine concerns, and it’s wrong for us to dismiss them as merely anti-Muslim.

There are clearly situations where the face covering should not be worn. Back in 2009, when I interviewed a group of veiled women for my research, all of them felt that there are important exceptions, such as for security and ascertaining identity. I don’t think any of them would have had a problem removing it in a court setting.

The problem with a public debate of this sort, with a hugely political backdrop, is that it detracts from the really important questions that need to be asked by Muslims themselves.

What is the niqab? Where does it originate from? Is it really a part of Islam or is it a cultural practice? Is it acceptable as part of Islam to wear the niqab in a country where people interpret it as sinister or maybe even disrespectful? Does it actually say something about the status and position of a woman and her involvement in public life or not?

Islam has a long and healthy tradition of discussing and debating different views just like this, and through that discussion taking people collectively to a standing which is far more relevant and in tune with their given social context. It doesn’t mean that everyone will agree – differences in perspective are important and healthy for any society – but it does mean we understand other people’s perspectives and can re-assess things through the prism of Islamic values in the social context of today and not just under political duress.

The current divisive nature of the discussion actually makes life for Muslims like me, much, much more difficult, who do actually want to look again at these issues and encourage Muslims to re-assess their importance and indeed relevance to life in Britain today, reducing it to a very black and white issue of “are you for the veil or against it?”

So my message to those who have rushed to call for a “ban” on the niqab is this: if you’re serious about standing up for women’s rights and empowering them, don’t tell people how to dress, but allow them to have a neutral political space where they can ask the questions that need to be asked. Let them have the debates and discussions on a more level playing field, so that all sides can be heard and all views debated.

This is precisely the type of role that organisations such as New Horizons can play, a civil society-led discussion with a view to reform, that can be critical of tradition on the one hand and yet be sensitive to working with that tradition, on the other.

Rabiha Hannan is co-founder of New Horizons in British Islam, a charity that works for reform in Muslim thought and practice, and is co-editor of Islam and the Veil (2011).