Conservative conference fringe: how to win in a changing Britain?

The Conservative Party will never win their first majority in a quarter-century unless they attract new support. This will have to come from new voters whom they traditionally haven’t thought were with them or like them. This challenge, of reaching and winning the support of such voters – in the north, in cities, among young people and ethnic minorities – was discussed at the “Future majority: how can the Tories win in a changing Britain?” event at the Conservative Party Conference, writes Steve Ballinger. 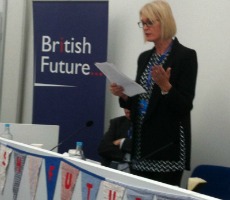 The event, a fringe hosted by British Future and ConservativeHome, coincided with the publication of new research from British Future, From minority vote to majority challenge, which found that a modest increase in the Conservative Party’s share of ethnic minority votes – from one in six to one in three – would have won the Tory party 24 seats from Labour in 2010, giving David Cameron an outright majority. This, said panelist Eric Ollerenshaw as he waved a copy, “…is pretty conclusive. The ethnic minority issue is a national issue.”

Addressing issues with the party’s image and its visibility to various groups of voters was a recurrent theme from the panel and audience, chaired by Ian Birrell of the Daily Mail and featuring panellists Alok Sharma MP, Margot James MP and Ollerenshaw OBE MP, together with ConservativeHome editor (and former MP for Wycombe) Paul Goodman.

It is not just with ethnic minority voters that the party has an image problem, said James. Appealing more to young voters, to women, to people in Scotland, northern England and in cities are also big issues for the party.

She pointed to recent polling which suggests that the party is doing better with youth. But a key issue, she added, is that many of those who are actually creating policy for the party – mainly “straight white men in their 20s and 30s” – have never experienced prejudice so struggle to connect with those who have.

Ollerenshaw focused on the party’s struggles in the north of England. If northern voters haven’t seen a Conservative for generations, “all they hear about the Conservatives is legend,” he said. One member of the audience, a party member from Middlesborough, illustrated Ollerenshaw’s point perfectly: “many of my friends are much more right wing than I am,” she said, but they vote Labour all the same. For many people in her community “it is still the only party.”

There are towns and cities which don’t have any Tory councillors and perhaps haven’t for some time, Ollerenshaw added. Even MEPs could give the party some kind of base in towns and cities where they have had no contact with Conservatives. But putting forward local candidates who connect with people is vitally important, the panel agreed. It would be an important way of making Tories appear, to voters, to be “people like me.”

This factor is true of northern and minority voters alike. James pointed out that in the absence of a local Tory presence, for many voters their main experiences of the party were brief glimpses and soundbites from cabinet members on TV. Lack of diversity at the very top – despite progress at the level of MPs and candidates – contributed to a “not like me” reaction from minority voters.

Sharma identified some positives. As minorities become more integrated, he said, voters are less influenced by their parents’ voting choices. Connecting on issues that affect all of us – housing and home ownership in particular – was key.

The Reading MP also pointed to the positive example of Canada’s conservatives, who turned their own situation around from being a declining party with minority voters to one which outperformed all others with that demographic. Their success boiled down to simple political strategy of emphasising and appealing to shared values. This is something that British Tories could emulate, he added, referring to his father’s view that Margaret Thatcher was Britain’s “first Asian Prime Minister,” based on her values of hard work, business, family and aspiration.

ConHome’s Goodman, along with  Ollerenshaw, was keen to focus on what the party could actually do. Long-term planning and smart campaigning were important, said Goodman, adding that Tories should “get there before the opposition” and lead in this area.

He also identified a challenge for the future, one felt by many Conservatives; that in reaching out to new supporters they might lose touch with their base. A successful party will have to engage with numerous issues at the same time and resonate with different sections of the electorate.

Sunder Katwala from British Future interjected from the floor that this need not be so difficult. “It’s important not to exaggerate the difference of ethnic minority voters,” he argued. Conservatives, like other parties, need big arguments that will work for everyone: “What motivates minority voters is what motivates most people. They’re worried about childcare, not Kashmir,” he said.

The age shift, between attitudes and voting intentions of the young and older people, is a big issue for Conservatives. Ukip’s appeal is predominantly to older men who are pessimistic about the way the country is going, and Tories will clearly need to keep these voters inside the tent while trying to get others to join them. This is no reason for defeatism, however. It isn’t just an issue for Conservatives but one for all politicians. James underlined this: “It is challenging for Conservatives to win a majority. But it is challenging for Labour too.”