If Nick Clegg takes one lesson from the first debate against Nigel Farage into the BBC second leg next week, it should be to spend less time on “what the real facts show” and more time on anecdotes to illustrate his arguments, argues Sunder Katwala. 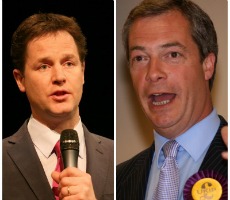 Clegg explained why he took the approach during the debate, saying that people just want the facts, and so it was his role to calmly set them out. But there is a foundational problem with this. To the extent that undecided voters do just want the facts, they are likely to trust many other sources ahead of the politicians who are leading the charge for the ‘in’ or ‘out’ cause.

Eastleigh voter Madeleine Drake told BBC news why, having watched the whole debate, she ended as she began: undecided.

“Both sides fire a lot of facts and figures at you, which they bandy around. Facts and figures, in the end you believe what you want. They are both as convincing as each other. That’s the problem. And you don’t know quite – well, I can’t make my mind up – which side is being honest with these figures.”

Both leaders inadvertently showed why many viewers will find their fact-based talking points a little slippery and elastic. “That’s the estimate we’ve made,” said Farage, when asked where his figures for the number of laws made in Brussels came from, before saying he could have picked a much higher number from another source. But it was from Clegg that Nick Ferrari, the moderator, drew a “read the small print” error

The real role of these claims and counter-claims is not to persuade the undecided. Rather, their impact is to raise the morale of existing supporters, who find them convincing, and persuade others in the process as they enthusiastically retweet them onwards. That these factual claims do easily land with the already persuaded, on each side, is not because existing partisans have any more capacity to retain the figures. It is rather because the rebuttals confirm their existing mistrust of their opponents’ motives. So Eurosceptics will have been convinced last night that Nigel Farage destroyed Clegg’s “three million jobs” figure. Pro-Europeans, however, will believe that the “most laws are made in Brussels” meme was significantly undermined by the debate.

Farage struggled considerably more when pressed by Ferrari over his claims about the cost of the EU to the UK. He had found it much easier to brush off Clegg’s challenges – by simply asserting that other studies proved the opposite, and challenging his opponent’s claims on “you would say that wouldn’t you” grounds. Clegg did exactly the same to him.

Farage had begun the stronger – on the trust issue of whether a referendum offered by a bigger party would be a pledge that they would keep. The UKIP leader’s weakest section was on trade and jobs, where he cited figures about the car industry and the balance of imports and exports, without acknowledging that getting out is a big change which could not be risk-free. Here, Clegg did better by focusing on voicing anecdotal examples – about Siemens in Hull, or Nissan and Ford – to illustrate his claim that investment and jobs were at stake.

Similarly, Clegg responded on crime with examples of criminals apprehended under the European arrest warrant. This was a far more effective way of animating a point.

‘Why facts are a comparatively ineffective way to persuade’ is the theme of a growing body of political psychology research. Books such as Drew Westen’s ‘The Political Brain’ have helped to popularise these lessons for politics rooted in brain science. Westen writes of US politics that Democrats and liberals “tend to be intellectual. They like to read and think. They thrive on policy debates, arguments, statistics, and getting the facts right. All that is well and good, but it can be self-destructive politically when allied with a belief in the moral superiority of the cerebral at heart, because moral condescension registers with voters. … They do so, I believe, because of an irrational emotional commitment to rationality – one that renders them, ironically, impervious to both scientific evidence on how the political mind and brain work and to an accurate diagnosis of why their campaigns repeatedly fail.”

Those lessons apply to a wide range of issues, on both sides of the Atlantic, but there are two political debates where factual advocacy is especially likely to struggle. They are Europe and immigration, which happen to be the two central themes of the Clegg-Farage debates.

The Europe debate is partly about a rational calculus of the benefits of being in or out: the constraints of pooling sovereignty against the risks of walking away from a seat at the table. But to think it could be settled entirely on that basis is to miss the point. The Europe debate is also, primarily, an argument about whether to choose between, or how to reconcile, competing understandings of our cultural identity and values. Claims about mistrust, betrayal and even a conspiracy of the elites are a key motivator of one side of the argument.

This is also true of immigration, where the public have also heard governments of both colours say that the system is broken and not fit for purpose, and believe this to be true. People quickly say they have no reason to believe facts which cannot be fully accurate. When Ipsos MORI confronted survey participants, who had significantly overestimated the proportion of migrants in Britain, with the ‘real’ figures, “I still don’t believe it” and “those are the people you know about” were the two most popular responses. “I was just guessing” was much less common.

This article first appeared on openDemocracy here. It has been modified for British Future.