Marking a century of Muslim service in British armed forces

After 19 hours without food, nor even a drop of water, the prospect of the single succulent date which breaks the fast looms ever larger in the mind as sunset nears, writes Sunder Katwala. 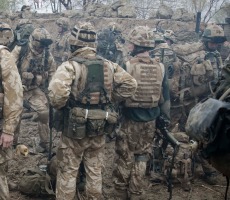 A few minutes after nine last night, similar scenes were doubtless playing out in mosques and Muslim homes around Britain. But this event was a little different. As the imam’s prayer rang out across the high ceilinged courtyard, many of those kneeling to pray were in khaki uniforms while others wore headscarves. The Ministry of Defence had invited Muslim soldiers and civic Muslim groups to break their Ramadan fast with a celebratory feast in the Whitehall citadel of the British defence establishment.

New Defence Secretary Michael Fallon said he was proud that the occasion marked his first public speech in the job. “It has never been more important that our Armed Forces represent the breadth of the society we serve,” he said, noting how few people know that 400,000 Muslims fought for Britain “with loyalty and pride” in the first world war a century ago, and another 600,000 in the second world war.

Almost a decade ago, imam Asim Hafiz became the Armed Forces’ first Muslim chaplain. He has served on tours of Afghanistan. Now he is Islamic adviser to the service chiefs, and spent the last year using his boundless energy and considerable charm to build the relationships that could make the new forum possible.

“Love of your country is a Muslim duty,” said Hafiz. “Serving your community is part of the Muslim faith.” Governments have to take the political decisions about war and peace; but the values represented by those who serve in the armed forces — courage, discipline, respect and protection of our country — are widely shared in the Muslim community, he said. That dozens of Muslim groups had come together to be founding partners of a forum committed to celebrating service and commemorating sacrifice showed a strong appetite for this relationship, he said.

“Commemorating that history of service shows that our roots in this country go much deeper than many realise,” said Dilwar Hussain, whose project New Horizons in British Islam speaks to a British Muslim identity confidently rooted and at home here.

But the biggest challenge for so many constructive Muslim voices is how to get the media platforms and public attention that the noisiest, most regressive voices can always take for granted.

The largest academic research study of ethnic minority attitudes reveals that 62% of non-white Britons say they wear a poppy for Remembrance Sunday, including just over half of respondents from Bangladeshi and Pakistani backgrounds. The quiet integration of a million poppy-wearing Muslims will always struggle to compete for airtime with the provocative shock and awe of half a dozen idiots who choose to burn a poppy in the hope they can make their desire for a breakdown in community relations a self-fulfilling prophecy.

The new forum may seem an unusual alliance to some, but that may give it some chance to redress the balance.

“We have never had a meal like this in the history of the Ministry of Defence,” said Sir Nicholas Houghton, chief of the Defence Staff. He welcomed the contribution of the 650 Muslim personnel in the forces today, and said he would like to welcome many more as both regulars and reservists.

The first world war centenary reminds us that the British Army can draw on more than a century’s experience in accommodating the reasonable needs of those of minority faiths, catering at the time for the needs of Muslim, Hindu and Sikh soldiers who made up the Indian Army. Muslim soldiers who lost their lives in the Great War were buried according to tradition, despite German propaganda to the contrary.

The Ramadan event marked a new venture, which will need to engage with contemporary challenges. It could also be understood as a new chapter in a rather longer history than most appreciate.

This article first appeared in The Spectator here. It has been modified for British Future.