Building a legacy of volunteering after COVID-19

The COVID-19 crisis has seen hundreds of thousands of people come forward to volunteer for local and national organisations, writes Jill Rutter, or to give their time to help vulnerable neighbours. By the end of March 2020 over 750,000 people had signed up as volunteers. In Lewisham, South London, where I live, 2,000 people have come forward to help local charities, with similar responses across the UK.

As well as providing practical support, volunteering can bring people of different backgrounds together and in turn drive social integration. This is one of the reasons that the Social Integration All Party Parliamentary Group looked at volunteering in its new report on social isolation and integration in the COVID-19 crisis. It recommends that the Government and charities need to act now to make sure that there is a legacy from the recent volunteering effort.

Evidence shows that the numbers of people offering their time as volunteers has increased since lockdown began. Those who have researched this subject often categorise volunteering as a formal or informal gift of time. Formal volunteering is time given to an established and formally constituted organisation, for example, local charities, membership organisations or school governing bodies, with just over a third (36%) of people aged over 16 taking part in formal volunteering at least once in 2018-19. People may also offer their time informally, for example by shopping for an elderly neighbour, with 52% of over 16s offering their time in this way in the same year.

There are also types of volunteering that span the formal-informal divide, for example, organising a street party for the Big Lunch or the Great Get Together. The COVID-19 crisis has seen the growth in mutual aid, a new type of volunteering that also spans the formal-informal categorisation. Here, groups of people have come together with the agreement to support each other, as well as to reach out and help vulnerable members of their local community. Analysis for the Social Integration APPG inquiry found that there were 2,773 COVID-19 mutual aid groups up and running by mid-April 2020. 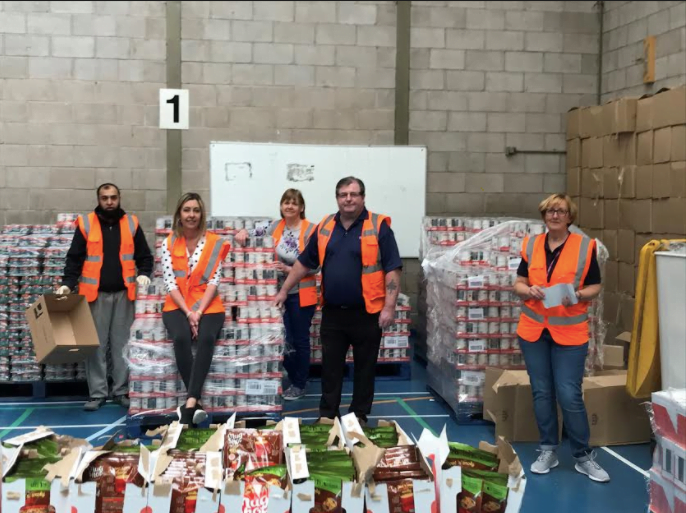 All types of volunteering can be important drivers of integration, as it can bring people of different backgrounds together. Policy has tended to focus on formal volunteering, but informal volunteering and mutual aid can also help build relationships of trust and reciprocity, turning strangers into friends.

The Social Integration APPG’s report is calling for action to build a legacy from today’s effort. While thousands of people came forward as NHS volunteers, many of these would-be volunteers have yet to be allocated tasks, leading to disappointment and potentially discouraging them from future volunteering. It became very clear that national and local charities often lacked the infrastructure to deal with large numbers of volunteers. A priority for action is for charities to review how they use and support volunteers.

If volunteering is something that helps build a more connected and integrated society, it is also important to increase volunteering among groups less likely to offer their time. Younger people, low-income groups and those who live in more deprived areas are much less likely to volunteer. The most recent Taking Part Survey (England) suggested that overall 29.6% of adults offered their time as formal or informal volunteers during the last 12 months, but this falls to 19.9% in the most deprived areas. A number of charities have called for practical action to increase formal and informal volunteering among young people and in deprived, high-churn neighbourhoods. 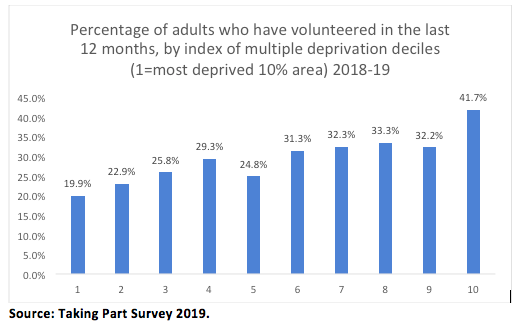 Employer support for volunteering appears to have increased during this crisis. The Social Integration APPG heard many examples of employers who were encouraging volunteering and were supportive of flexible work arrangements to allow this to happen. Such initiatives had taken place in large organisations as well as in small and medium-sized enterprises (SMEs). It is hoped that such encouragement continues when life returns to normal as it is something that civil society organisations and groups such as the Scouts and Guides have long called for. A ‘passportable’ Disclosure and Barring Service system, enabling these checks to be undertaken once and then to cover volunteers for a fixed time period, is another policy change that could encourage more volunteering.

If volunteering is to help encourage integration, it is essential that organisations using volunteers consider social mixing. Volunteering can be a powerful tool to bring people of different backgrounds together, dispelling mistrust and misconceptions and so building more resilient and integrated communities. But this only happens if there is a social mix of volunteers, with young and old, different classes and ethnic and faith groups working together. There have been some wonderful examples of this taking place during the COVID-19 crisis, with faith groups and interfaith initiatives at the forefront of work to deliver practical support such as food deliveries.

Volunteering is an indicator of bonds of trust and a healthy social fabric in local communities. The absence of such groups can be an indicator of weaknesses in the social infrastructure. As this country emerges from this crisis, strengthening this social infrastructure needs to be prioritised. The Government, civil society, business and other institutions and indeed we as individuals will all need to play our part in making this happen.

Jill Rutter is Director of Strategy for British Future, the secretariat for the All Party Parliamentary Group on Social Integration. She volunteers at Lewisham Food Bank.

"Brexit: UK to ban more EU citizens with criminal records https://t.co/WGSTHanOEP"
"RT @captaintommoore: I’m proud to be collaborating with @CadburyUK @age_uk encouraging everyone to #DonateYourWords and start a conversatio…"
"'Forgotten Sacrifice: How can we Remember the Black and Asian soldiers of the Second World War?' #RememberTogether… https://t.co/K7SDd5U8k2"
"RT @Coventry2021: Today, we're excited to announce the first events that will form part of the 365-day programme of UK City of Culture 2021…"