British Future picked up the “One to Watch” award at the Prospect Thinktank of the Year awards last night, writes Steve Ballinger.

The judges said that British Future was growing in influence, with our “nuanced approach to immigration” gaining attention at both ends of the political spectrum.

The award was presented to British Future Director Sunder Katwala by Prospect’s editor, Bronwen Maddox, at a packed ceremony at the Institute of Directors.

A happy British Future team posed for a photo with the award, joined by trustee Simon Clark and Ken Olisa, the Lord-Lieutenant of Greater London.

The Institute of Fiscal Studies picked up the overall  Think Tank of the Year award  – full details of all the winners here. 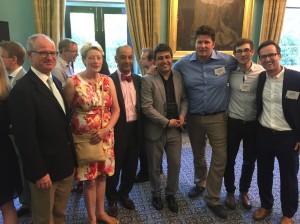