British Future at the party conferences 2013

British Future completed a busy party conference season, visiting Glasgow, Brighton and Manchester as we attended all of the main party conferences in 2013. Here is a brief summary from our events. Full reports of each event are available using the links below.

Starting with the Liberal Democrats conference in Glasgow, we partnered with CentreForum and the Fabian Society to ask the question: “Populism: have the politicians got the message?” 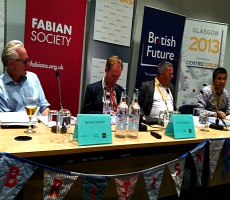 Chaired by Stephen Lee, chief executive at CentreForum, panellists included the Liberal Democrat MP Norman Lamb, Labour MP Jim Murphy and British Future director Sunder Katwala. There was a strong consensus during this event that  politicians need to accept there is some validity in this charge; also that politicians need to engage with populist debates without changing the topic or conceding the argument.

“Changing the subject is something that we as a party have tended to do. That fails people,” said Lamb. “We should never be dismissive of people’s concerns and seek to understand, not to lecture,” he added.

Lamb argued that a liberal defence of the benefits of immigration should be combined with acknowledgment that there are different impacts of immigration, especially in the short-term. Practical answers to these pressures are needed in order to challenge those seeking scapegoats.

At the Labour Party conference a similar event was run with Katwala this time chairing. Labour MPs David Lammy and Sadiq Khan discussed the question, “What’s the answer to populism?” with journalist Zoe Williams and former Liberal Democrat MP Dr Evan Harris. This panel started by looking close to home at politicians’ failure to connect with the public and the media’s reporting of debate. Nigel Farage’s cheeky chappie persona is perceived as authentic, even though he is the privately-educated son of a banker, said Khan. Lammy continued on the same theme, picking some unlikely examples of politicians who do it well. “Politicians have massively underestimated Boris,” he said. “His  authenticity has chimed with the public.” A video of the event is below:

The final leg of the conference season was with the Conservative Party in Manchester. Partnering with ConservativeHome, we jointly published new research for the event, From Minority Vote to Majority Challenge: How closing the ‘ethnic gap’ would deliver a Conservative majority.

Chaired by Ian Birrell of the Daily Mail, panellists included the Conservative MPs Alok Sharma, Margot James and Eric Ollerenshaw, with ConservativeHome editor Paul Goodman also addressing issues with the party’s image and its visibility to various groups of voters.

It is not just with ethnic minority voters that the party has an image problem, said James. Appealing more to young voters, to women, to people in Scotland, northern England and in cities are also big issues for the party. Check out video highlights from the event.

Full reports of the events are also on our website: