This historic democratic vote split Britain down the middle writes Sunder Katwala. By 17 million to 16 million votes, the people’s referendum verdict was that Britain should leave the European Union. In Scotland, Northern Ireland and London, majorities voted to Remain, while Wales joined every English region outside the capital in voting to Leave. British Asians voted for both sides in significant numbers. A referendum day poll by Lord Ashcroft showed a 67% to 33% preference to Remain, among Asian respondents, a pattern consistent with earlier research, while white British voters narrowly voted Leave by 53% to 47%.

Trevor Phillips described the vote for Brexit as a ‘victory for white tribalism,’ which could make ethnic minorities worry about whether they have a future in Britain. That frustration among London opinion formers about the result offers too one-sided a take on the non-white view of Brexit. Indeed, the Ashcroft results suggest that up to a million ethnic minority Britons voted for Leave, and twice as many for Remain. 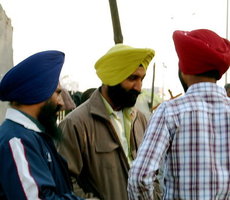 As the referendum results came through on the night, the Remain campaign’s final hopes of overtaking Leave depended on securing large majorities in the cities. Outside London and Scotland, they couldn’t achieve that. Bradford saw a 54% vote for Leave. Leicester did vote Remain, but only by a tiny margin of under 3000 votes. Birmingham confounded expectations that it might vote strongly for the EU by being Britain’s largest city to have a Leave majority, in a neck-and-neck count, where only 3000 votes out of 450,000 separated the two sides. The ability of the Leave campaign to win Asian as well as white votes undoubtedly made a significant contribution to these results.

I spent three hours on the BBC Asian Network on the morning that the results came in, as Nihal Arthanayake fielded calls from listeners both thrilled by the Brexit result as democracy in action, and worried about its economic or social impacts. Being able to make your own mind up, about which side of a big national debate to choose, strikes me as a positive indicator of integration in Britain. Yet the Leave campaign arguably still underperformed with British Asian voters. This is a group who could be natural Eurosceptics, feeling much more British than European and sceptical about free movement rules that automatically prefer Poles to Indians. A trust barrier remains, however – so getting the tone right on immigration matters. Nigel Farage’s ‘Breaking Point’ poster of refugees will have cost the Leave campaign support among British Asians.

So, what happens next? Britain has voted to Leave but without knowing much about the choices that come next – or about what leaving looks like.

There are immediate concerns about the economy. Crossbench peer and entrepreneur Karan Bilimoria fears that the Remain campaign’s failure to win the argument could see Britain regress to being ‘the sick man of Europe’ as it was in the pre-Thatcher years. After the vote, the argument is not about Remain or Leave anymore, but about a global outward-looking Brexit Britain, able to compete in the world, or a closed and more protectionist vision.

Secondly, we need to get the immigration debate right – and to keep prejudice out of it. The Leave vote reflects a loss of public confidence in how governments have handled immigration over the last fifteen years. But that is not the same as being anti-migrant. Most people want governments to get a stronger grip on the pressures of high migration, while keeping the gains for the British economy, and welcoming those who come here to contribute.

There are deeply worrying reports of increases in racist incidents. If a toxic, racist minority of street fascists think this democratic referendum gives them a licence for their views, it is vital that this sense of licence is revoked. The leaders of the winning side needs to remind people that the question on the ballot paper was whether Britain should remain in the EU – not whether we are turning the clock back from 2016 to 1972.

Thirdly, Britain will have new political leadership – but we won’t get Britain’s first Asian Prime Minister, not just yet anyway. Priti Patel, a prominent campaign voice for Leave, looks set to back Boris Johnson. Business Secretary Sajid Javid, a long-standing Eurosceptic, made a head-over-heart choice to support Remain because of the economic risks. Rather than bidding for the top job this time, Javid looks set to campaign on a joint ticket as deputy to Stephen Crabb, the Work and Pensions Secretary. Whoever wins the leadership, rival contenders for Number 10 may see merit in Javid becoming Britain’s first British Asian Chancellor of the Exchequer, championing an outward-looking Global Brexit so as to spread opportunity and champion inclusion at home.

The country will want leadership that rises above party politics. Politicians need to make clear to the public that it no longer matters whether you were part of the 52% who voted to Leave or the 48% who preferred to Remain.  Instead we must find practical ways for people to come together and to work out how we can get the best Brexit for Britain.

This article first appeared in Eastern Eye on 30 June