Is this Britain’s angriest election?

‘Is this Britain’s angriest election?’ – that was the question posed at an event this week from British Future and The UK in a Changing Europe, writes Josh Westerling. The answer? Not so much.

Panellists Sunder Katwala of British Future, Professor Tim Bale, Professor Maria Sobolewska, TalkRadio’s Mike Graham and Chair Jill Rutter of The UK in a Changing Europe looked at the evidence so far and how the 2019 contest compares to past elections.

Kicking things off, Sunder made the point that anger can be contained within democracy, acting as a safety valve for public anger increasingly directed at a gridlocked Parliament. Indeed, Tim Bale noted how elections have always been, for better or worse, angry affairs. One only need to look back to 1945 when Churchill invoked the spectre of ‘some form of Gestapo’ were Attlee to win.

But, Sunder said, while ‘anger is legitimate in an election’ – one can be angry about austerity, the Brexit process or potholes – the issue is when this anger boils over in to violence or prejudice. Fortunately in this election anger seems to have subsided, at least for one caller to Mike Graham’s TalkRadio show who said: ‘I’m not angry anymore, now I’m just disappointed’. 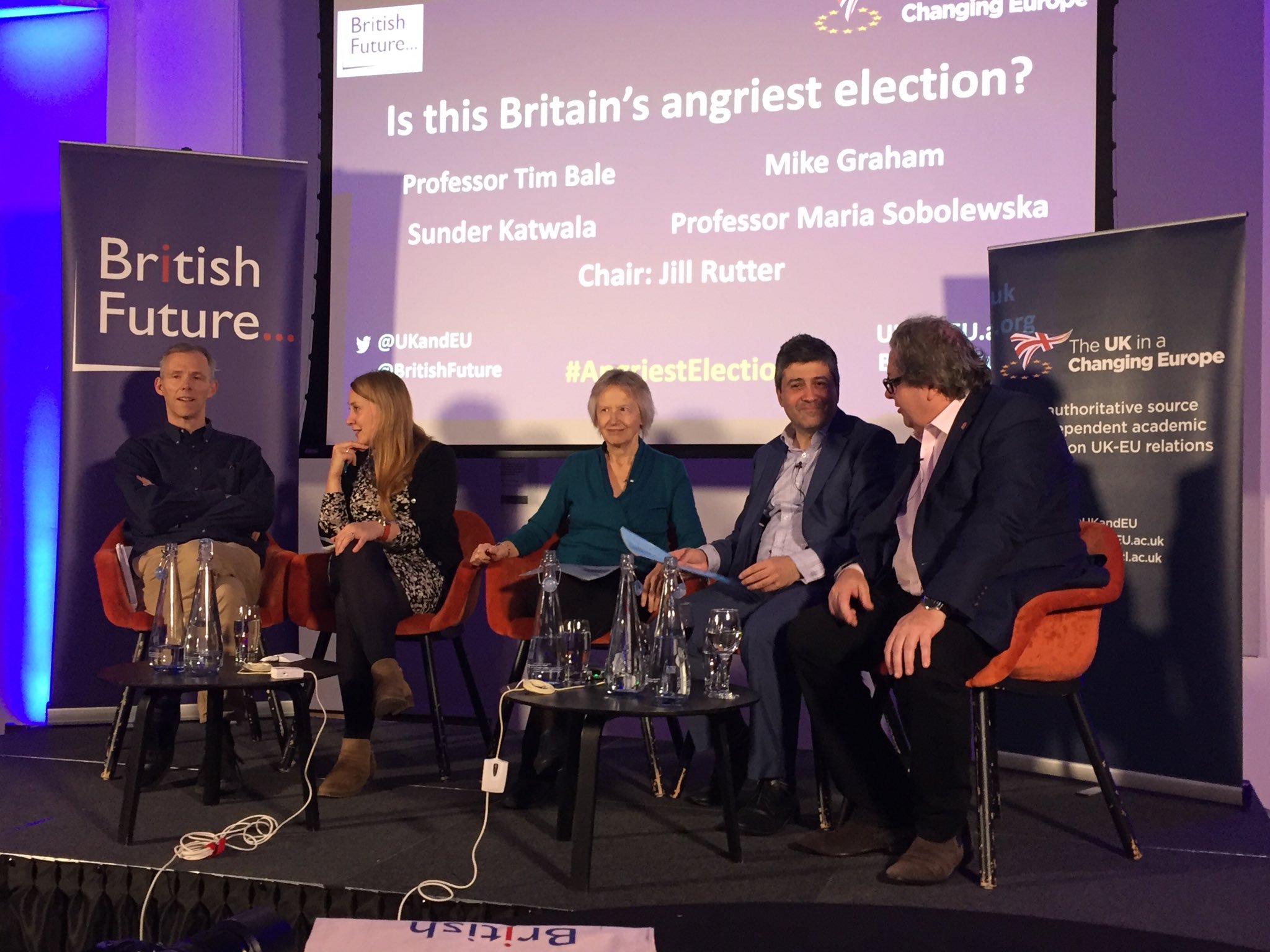 Yet anger does still exist in British politics and tends to be directed at certain groups, by certain people. Maria Sobolewska rightly pointed out that women and minorities tend to bear the brunt of abuse and harassment in British politics. This may have always been the case and the change has been that it is now reported and challenged. Though this is progress, it is worrying this abuse still exists.

Where does this anger come from? Society itself is less divided than we think, Sunder said, but our politics does not always reflect this. Tim Bale echoed this point, noting that while voters are not that tribal, party members have become increasingly polarised and face off with each other on social media. This intransigent tribalism means that while both the Conservatives and Labour are willing to call each other out on anti-Semitism and Islamophobia, too often they fail to call out prejudice on their own side.

So while it hasn’t gone away, anger has not been the main feature of this election. Sunder argued that an election can help to lower the temperature of our politics. If the country votes for a Conservative majority, then there is a mandate to leave with Boris Johnson’s deal and the Remain campaign will become the Return campaign. Equally if the country votes for a hung parliament or a Labour government then that is what the people voted for.

So, Jill Rutter asked, if this isn’t the angriest election what is it? For Tim it’s the dodgiest, for Maria the bad weather election. Mike suggested it’s the joke election, for Sunder, the unpredictable election. It is possible that it could be all these things, but we should be happy that, in times which often feel polarised and divided, the country is holding an election that has – so far – been less angry than we might have expected.