Stats reveal Murray victory a moment of unity across UK

As Andy Murray broke the most unwanted record in tennis, 77 years without a British men’s champion, there has been a lot of debate about how much of a British victory this was. However, the statistics highlight that all corners of the UK were united behind Murray, not just Scotland, writes Douglas Jefferson. 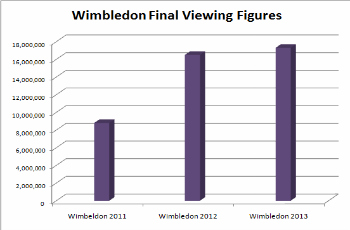 UK viewing figures doubled between the 2011 final, when Novak Djokovic played Rafael Nadal, and Wimbledon’s 2013 final. In 2011 an average 5.5 million people watched the final. This year the average audience was 12.1 million, ultimately peaking at 17.3 million viewers.

Nearly eight out of 10 people across the country were tuned in. Scotland had the highest share, with 85% of the potential audience as opposed to 78% across the whole of the UK.

It was comfortably the highest television auidence of the year so far, eclipsing the number of people who watched the Britain’s Got Talent final, and was the most viewed Wimbledon final since at least 1990 when the method of recording the statistics was altered.

This wasn’t a one time event though. The audience was almost as large in 2012 when nearly two-thirds of all households across the UK tuned in to watch Andy Murray ultimately lose to Roger Federer, a peak of 16.5 million people watching on that occasion.

Far from being restricted to the Home Counties, the figures clearly show people all across Britain tuned in to watch Andy Murray lift the title that has so eluded British men’s tennis players.